Home Android Android 5.0 Lollipop Update Rolling Out to HTC One M7 and M8... 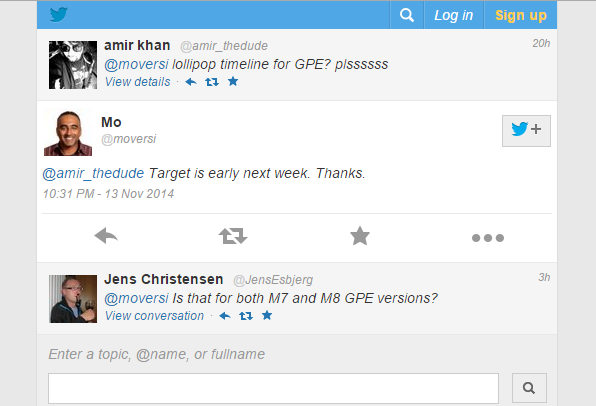 HTC VP of Product Management, @moversi has confirmed via Twitter the timeline for the Android 5.0 Lollipop update for the HTC One M8 and the HTC One M7 Google Play Edition. He mentioned the new software would arrive early next week.

The news comes as we expect more and more companies to release Lollipop, after Google started offering it yesterday on its older Nexus devices. LG G3 was also seen with Lollipop on board recently and so have the Galaxy S5 and S4. The S5 is said to get it in December, while HTC One M8 and M7 regular versions are expected to get it in around 3 months from the time HTC got the code from Google, which was about a week ago or so.

This leaves us with a worst case scenario of February release, but we’ll probably get Android 5.0 earlier than that. HTC would certainly want to be ahead of Samsung, Motorola or Sony, that are working very hard to deliver the updates on time. If you ask me, I think this will be settled before the year is out and the HTC flagships will have the latest Android by then.