After checking out the figures made public by the IDC report available this week, Comscore has released its own report, covering the three months average ending March 2011. Thus, we find out that Samsung is the favorite of the US mobile subscribers ages 13+, according to the studies. 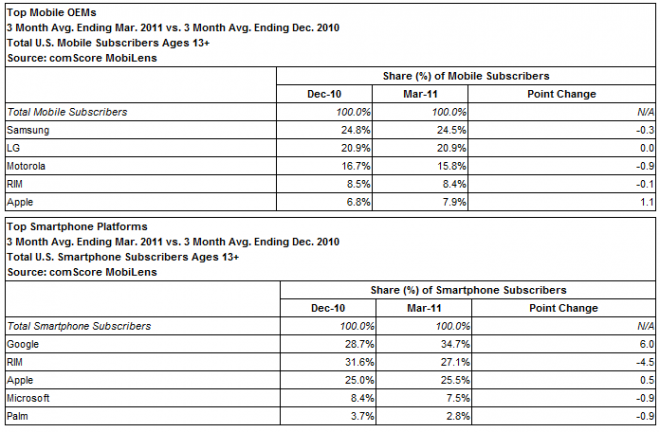 Samsung got 24.8% of the subscribers back in December 2010, while the 3 months ending in March made them reach a percentage of 24.5%, which is still number one. On second spot we find LG, with 20.9% in December 2010 and the same figure in this year’s first trimester. Motorola and RIM get 15.8% and 8.4% respectively in the same time frame, with Moto losing almost 1% in three months.

Finally, Apple’s next, with 7.9% of the market, up from 6.8% at the end of the past year. ComScore also published stats regarding the top smartphone platforms in the last three months of 2010, in comparison with the first 3 months this year. We’ve found out that RIM had 31.6% back in 2010, while now it dropped 27.1%.