AnyData’s device pictured below was shown on the web as a render till now, but we finally have some real shots of the ASP-518 smartphone, caught in action at MWC 2010. This is a Philips-branded handset that will only reach the Chinese market for now and it’ll run Windows Mobile 6.5 Professional. 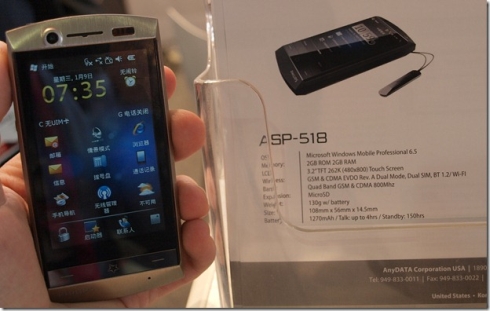 AnyData ASP-518 comes with GPS, a 3.2 inch WVGA screen, WiFi, 4GB of memory, a microSD card slot, a 5 megapixel autofocus camera at the back and a front facing unit for videoconferencing.

There’s also a MSM7627 Qualcomm CPU on board, the SRS audio technology among the specs and more.  Here’s a video of the smartphone in action at MWC 2010: