Apple’s App Store has just reached 10 billion app downloads, after a countdown that started many hours before the great landmark. On this occasion, the Cupertino giant awarded the person who downloaded the 10 billionth app with a $10,000 iTunes gift card. 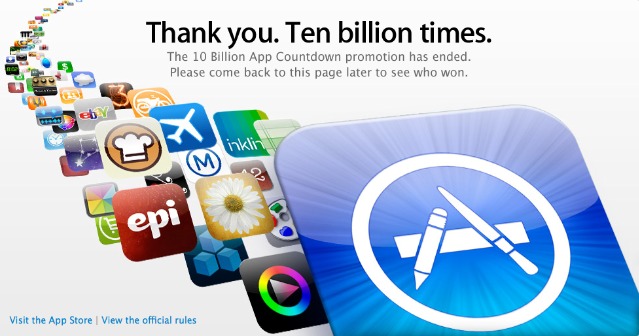 The figure is even more impressive, if you consider that the App Store hit 2 billion app downloads in September 2009. By January 2010, the 3 billion landmark was reached and we wonder how much time will pass till we reach the 20 billionth application download. The Verizon iPhone will most likely push this growth in the months to come.

Right now, the App Store provides over 350,000 apps for iPhone, iPod touch and iPad users in 90 countries worldwide. The iPad also gets its very own native software, 60,000 applications to be more precise.