ABI Research firm revealed recently that Apple went past the 1% market shared they estimated they would achieve in 2008, actually reaching 1.1%. The iPhones now stand for 1.1% of all phones in the world, a significant growth from 0.3% in 2007.

This performance makes Apple equal to HTC and better placed than Sharp. 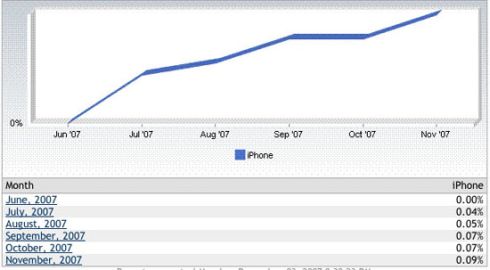 Nokia continues to lead the pack, although its market share has dropped to 38.6%, followed by Samsung with 16.2%. Next come Motorola and LG, tied on the third spot with 8.3% and Sony Ericsson with its financial losses and just 8%. RIM has a great 1.9% market share for its BlackBerry, up from 1.1 in 2007.

ABI Research expect Apple and RIM to continue increasing their percentages, a performance that also applies to HTC, mostly due to the hot Android handsets we’ll be seeing this year.