According to a recent J.D. Power and Associates study on US customer satisfaction, Apple is number one in this segment. It’s kind of logical, since they ship the most smartphones and the most popular model on the US market, so there’s a lot of units to go through. 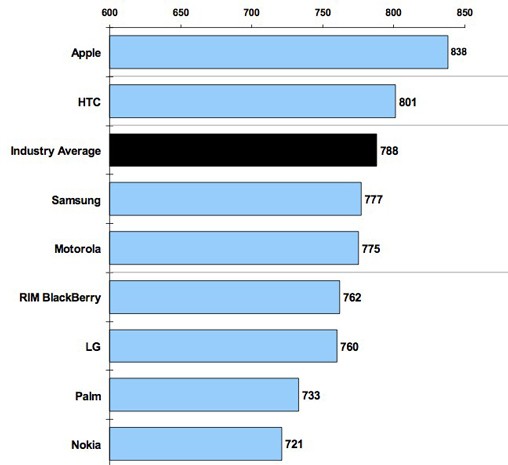 The iPhone gets a score of 838, on second place being HTC with 801 and both Apple and the Taiwanese maker are above the industry standard of 788 points. Samsung is barely placed on third place with a score of 777, but maybe it would be higher if the Samsung Galaxy S II were available in the US earlier. Next up is Motorola, very close by, RIM and its BlackBerries, LG, Palm and finally Nokia.

It’s logical that Nokia is found on the last place in the survey, considering how little love and fame it’s been enjoying lately in the US. Maybe with the Windows Phone pairing it will gain the US public on its side, but till then customer satisfaction is not so good and neither are local sales. I guess that return rates also have something to do with these figures, right?