The folks of EETimes have managed to get hold of an internal Samsung document showing ARM’s roadmap for the next couple of years. This list includes ARM chips for smartphones and netbooks, some of them very powerful, as you can see below. 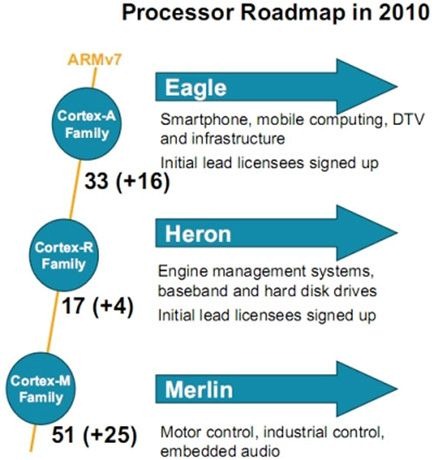 2012 and 2013 will be interesting for netbook users, since they’ll witness the launch of the Venus dual core 600 MHz Cortex-A5 CPU, followed by the Draco processor, that’s a 1.2GHz dual core Cortex-A9 unit. The icing on the cake will be the Aquila processor, a quad core 1.2 GHz Cortex-A9. Let’s just hope that Apple doesn’t buy ARM, as rumoured, since they’ll probably keep all innovations for themselves.