LG and AT&T have revealed the images and specs of the latest handsets that’ll hit the market with the AT&T logo on, but keep in mind that this is not an official announcement. These three new arrivals are LG Incite CF810, LG CF360 and LG CF750. 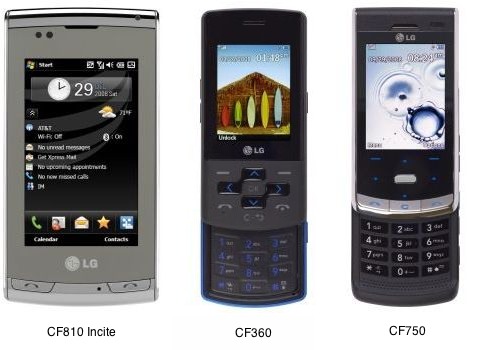 LG Incite CF810 uses Windows Mobile 6.1 and incorporates a wide screen display (240 x 400 pixels) plus a metallic body and a 3.2 megapixel camera. This smartphone supports tri-band HSDPA 3G, Wi-Fi and GPS, while its camera will be able to capture video.

LG CF360 is a mid-level handset, a mysterious one, that will probably reveal itself as times passes, while the LG CF750 is basically a clone of LG Secret. The looks are extremely similar, but the specs list includes a 5 megapixel camera and a touchscreen display with limited functionality.