Believe it or not, the Samsung Galaxy S III has yet to reach the carrier AT&T, in spite of the Galaxy S4 Mini being out on the market for a while now. The S III Mini has just leaked in an AT&T version, that’s shown below in a render, courtesy of @evleaks. 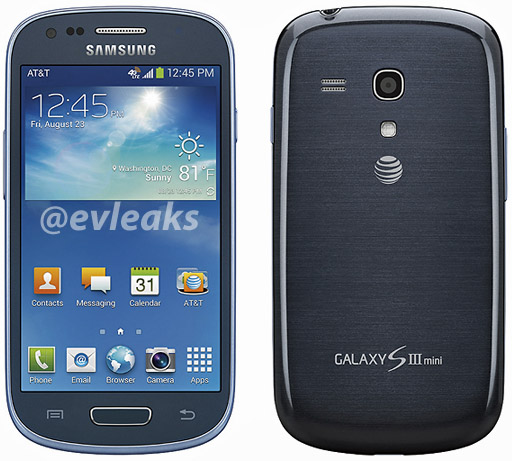 As you know, in USA there are slight differences between Galaxy S and related model versions. This leak claims that the model number is SM-G730A in this case and the codename is Golden. No mention of the specs here, but we suppose they’re the same as the international version, meaning we should get a 4 inch 480 x 800 pixel display, 8 or 16 GB of storage and 1 GB of RAM.

The device will incorporate a 5 megapixel camera at the back with LED flash and autofocus, plus 720p video capture capability. Upfront we should get a VGA camera and the handset should run Android 4.1 Jelly Bean. LTE should also be part of the package, but I wonder what the CPU will be. Maybe a 1 GHz dual core Cortex A9… maybe something else.