If the marble white and pebble blue Galaxy S III are not to your liking, then you’re in luck. The black version has popped up in the offer of a British retailer called Mobile Fun. Previously, the same black version was spotted on Facebook on some official shots from the Olympics. Now the device is listed as SIM free, in the black 16GB version, priced at 499.95 quid. 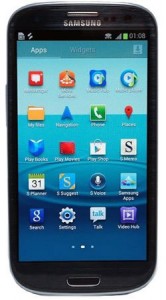 It’s also mentioned as coming back in stock in 4 to 6 weeks. The rest of the specs stay the same, including the quad core Exynos processor at 1.4 GHz, 4.8 inch HD display, Android 4.0 ICS, Bluetooth 4.0 and 1GB of RAM. The screen relies on a Super AMOLED Plus panel and at the back there’s an 8 megapixel camera with LED flash and 1080p video recording. It’s strange to see the Galaxy S III appearing in black only now, considering the Galaxy S II sold a lot of black units as the initial version and only then came the coloured versions.

I guess that in a couple of months we’ll see the pink and other versions of Galaxy S III, the ones that may appeal more to ladies or youngsters. I can see a red one being used a active people, a black one for business men, a green one for… well, whoever likes the green devices. Are you getting the black Galaxy S III? If so, you can get it from here.