This week’s leaks of BlackBerry 10 devices weren’t that impressive, especially because those models were midrange units by today’s standards. The likes of BlackBerry London, Lisbon and Laguna only packed TI OMAP and Qualcomm dual core CPUs, but now here comes a hotshot, the R081 Aristo handset, with BB 10 and a quad core ticker. 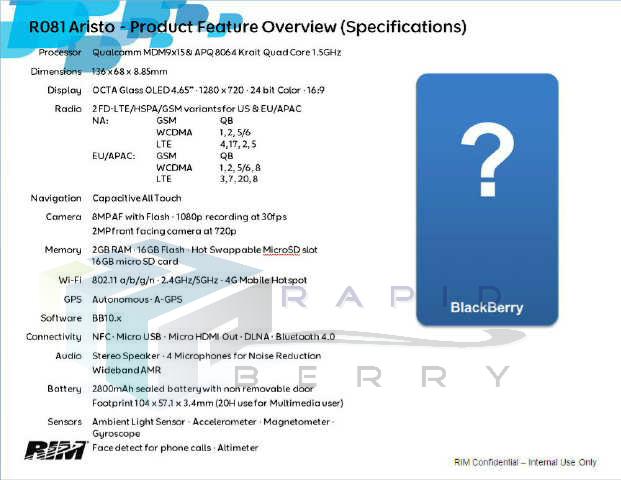 The handset adopts the much discussed Snapdragon S4 Pro 4 core chipset (1.5 GHz) and manages to be pretty slim, at 8.85 mm in thickness. BlackBerry Aristo features an OCTA Glass OLED 4.5 inch 1280 x 720 screen with 16:9 aspect ratio, plus LTE connectivity and an 8 megapixel camera with autofocus, flash and full HD 30 FPS capture. At the front there’s a 2 MP 720p shooter and other specs include 2 GB of RAM, 16 GB of flash memory, a hot swap microSD card slot and WiFi.

Micro HDMI out seems to be a big deal for RIM, since it included it on all of its future models and here as well, together with NFC, stereo speakers and big batteries. The Aristo has a 2800 mAh sealed battery with a non removable door. Face detection for voice calls and an altimeter are also mentioned on the leaked specs list. Apparently this device fits in the A Series, that will accompany the N Series and L Series in early 2013, in the first wave of BB 10 launches.