BlackBerry Laguna and London were already leaked today and now it’s the turn of BlackBerry Lisbon to leak, with a pretty similar specs list to the Laguna model. Laguna is actually the Verizon version of the handset, while the Lisbon is the exact same device, but in the AT&T and Canadian carrier version. 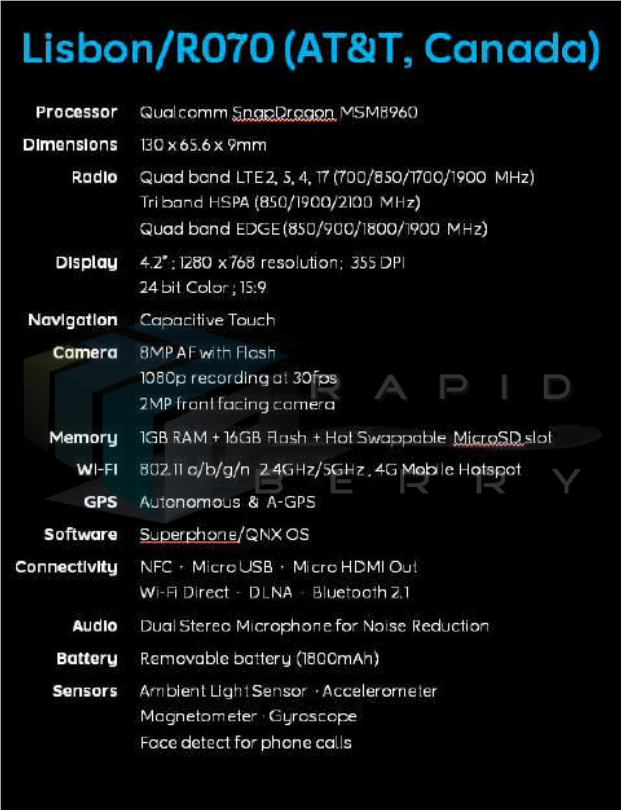 We’re dealing with a phone that measures 9 mm in thickness and packs a Qualcomm Snapdragon MSM8960 CPU, like the Laguna. Other specs include a 4.2 inch display with a 1280 x 768 pixel resolution and 355 dpi, plus an 8 megapixel camera with autofocus and flash. The camera does 1080p 30 FPS capture and is accompanied by a 2 megapixel front camera. Finally, the phone offers a 1800 mAH battery, 1 GB of RAM, 16 GB of storage, microSD card slot and micro HDMI out.

LTE should also be on board I guess and this is a GSM model, from what I’ve heard. It runs BlackBerry 10 OS and it’s part of the L Series, together with London and Laguna. We’ve yet to see a phone design for the Laguna/Lisbon, that may differ slightly. We all know how Samsung Galaxy units are tweaked for various US carriers and that may also be the case for new BlackBerry models.