It seems that the cash cow called Apple App Store appeals to RIM, since they’re preparing an BlackBerry Application Center of their own. The Canadians aren’t the only ones jealous of Apple’s initiative, as we’ll soon see the Android Market delivering apps to the T-Mobile G1. 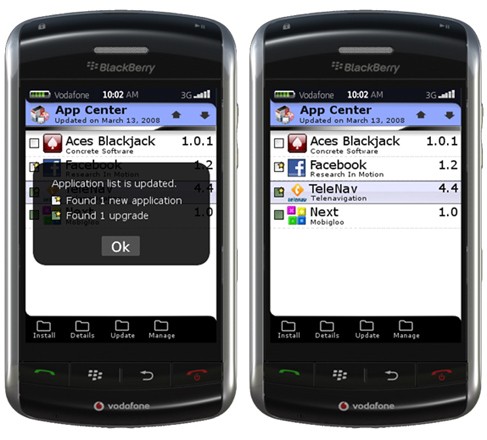 Apple set the trend again and this time it’s a positive one, although we’re not fans of putting prices on apps. As for the BlackBerry Application Center, we’ve only got a sneak preview of it, shots from the Vodafone edition.

This “App Store” will hit Storm devices (v4.7) and will also handle the updates of the RIM handsets. The process of downloading and installing software will be done via browser and I’m looking forward to the first ports of famous iPhone applications delivered to the BlackBerry Storm.