This is new BlackBerry week, with many announcements and leaks coming, not only to Sprint and Verizon but also to AT&T, like the model pictured below. This is the BlackBerry Torch 9860, that’s yet to be announced, but it’s still present in the image below. 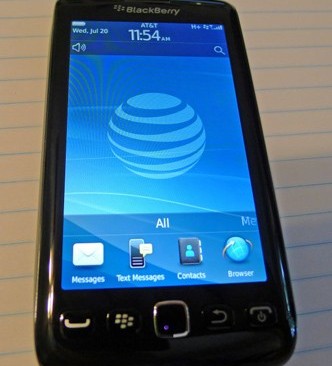 The confirmation that this device was coming to AT&T was available a while ago, as the leaked spec sheet pointed to support for the appropriate bands. There’s also a T-Mobile version out there with AWS bands support, according to rumors. This model has the largest screen and highest display resolution that RIM has offered so far: 3.7 inches and 800 x 480, so it’s a very appealing smartphone.

It’s also got NFC, a magnetic compass, portable WiFi hotspot feature, a 1.2GHz CPU and 768MB of RAM. Many of these specs are also found on the Bold 9900/9930 model, but with a QWERTY keyboard in the mix. This most likely a BB OS 7 unit that you may want to keep an eye on.