We’ve had the unique opportunity of test driving the BlackBerry Z10 last month and now we’re back with a fully detailed text review of the device. The product is up for $99 on Amazon with a 2 year contract, or you can pay $529 for it on AT&T off commitment. We’re dealing here with a model launched in January, together with BB 10 OS. 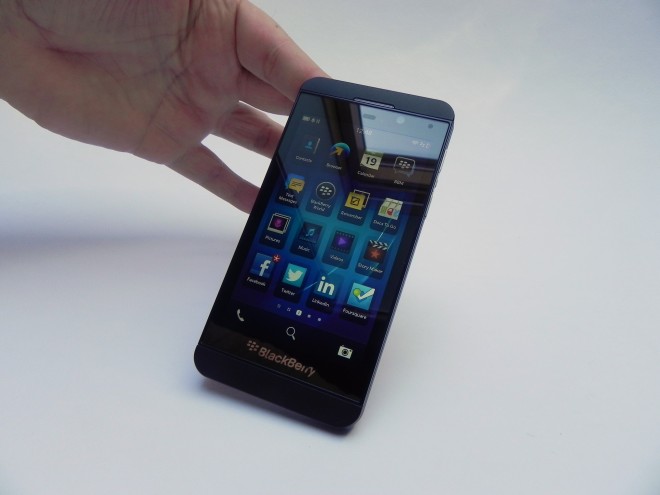 This is the first BB 10 OS handset and it comes with a chassis measuring 9 mm in thickness and weighing 137.5 grams. Its maximum temperature is 42 degrees, as our thermometer indicated and that temp is achieved in the center-right back area. We’ve got good grip thanks to the texture of the battery cover, that by the way is pretty easy to remove. From the front this model resembles the HTC One slightly and the iPhone 5 too.

BlackBerry Z10 has curved corners and it doesn’t come with a metal frame, that thing that provides elegance and solidity to a handset. It packs a 4.2 inch display upfront and looks great, but its bezels are kind of big. On the left side of the phone we find the micro HDMI and microUSB ports, while on the right we’ve got the volume buttons and voice assistant button between them, also used to pause music. 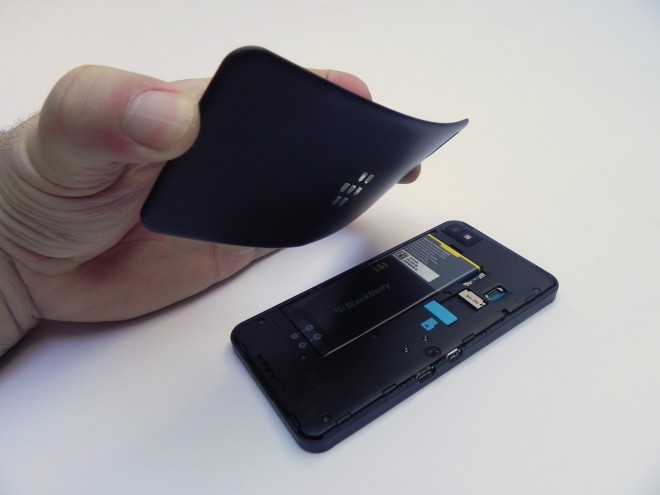 Under the hood of the phone we find the battery, microSIM card slot and microSD. On the rear of the battery cover there’s the NFC pad and the metal finish keys are quite nice, if we’re still discussing the design. Moving on to the hardware, the BlackBerry Z10 provides support for quad band GSM/GPRS/EDGE connectivity, as well as LTE and it comes with a TFT LCD 4.2 inch display with a 1280 x 768 pixel resolution. Specs also include a Qualcomm Snapdragon dual core 1.5 GHz processor and the Adreno 225 GPU, as well as 16 GB of storage, 2 GB of RAM, a microSD card slot, HSDPA with 21 Mbps speed, WiFi dual band and Bluetooth 4.0.

At the back we find an 8 megapixel camera with LED flash, while upfront we’ve got a 2 megapixel shooter. The battery inside the handset is a Li-Ion 1800 mAh unit, good enough for 9 hours of continuous HD video playback. The handset won’t reach the end of the day with a full charge, sadly. As far as the audio goes, the headphones are uncomfortable in the user’s ear, but at least they’re loud. 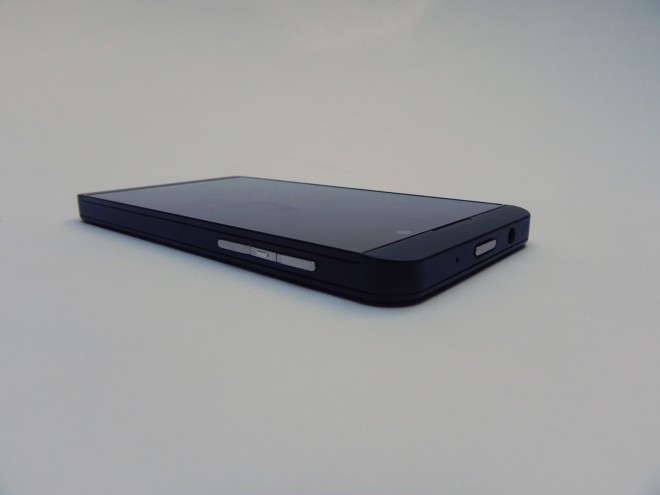 The audio app in BB 10 OS doesn’t have an EQ, but a good thing about the media experience is that you can listen to YouTube songs in the background, while you do something else. The sound of the speaker on the device is loud, it has good bass and it’s clean. Call quality is also excellent, always a trademark of BlackBerry. As far as video goes, a variety of formats are supported, from MP4 for video to FLAC for audio. The screen here is a TFT LCD with 800 nits of brightness, nice outdoor behaviour and 15:9 aspect.

The contrast is good, colors are vivid, but the view angles could have been better. Moving on to the camera, the discussion is longer here. We’re dealing with an 8 megapixel sensor, with LED flash and 1080p video capture. The UI of the camera is simple and when we filmed the review we didn’t have options like HDR or Panorama, but the former arrived with an update in the meantime. Among the options we find stabilization, burst shot that takes 6 MP pics and the option to drag and drop the focus on the screen to focus your shots. 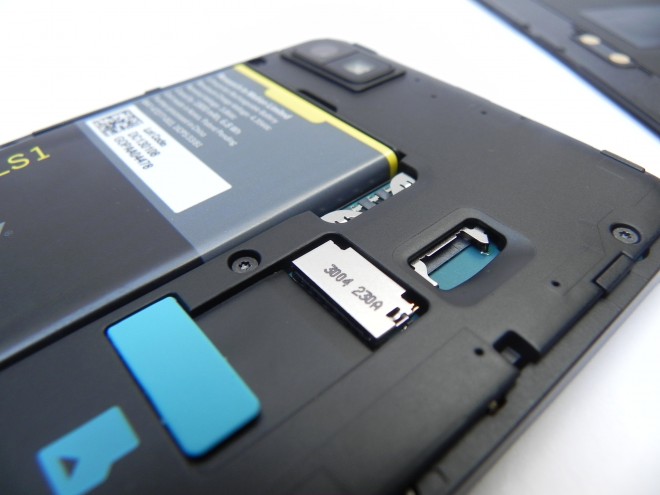 A feature that BlackBerry promoted a lot on this model is TimeShift, from Scalado. Basically it’s a burst shot for faces, that allows you to pick the face you like from the 11 results. As far as camera performance goes, the low light performance is decent, the flash is powerful and the pictures are reasonably bright. The macro shots/closeups look stunning, but the colors are bit surreal and oversaturated.

As far as video capture goes, you can do 1080p, with the result being an MP4 file with 16 Mbps bitrate and mono sound. Overall, this camera is not bad, being around the level of Galaxy S II, if you want a comparison. On the software side we’ve got a totally new experience, called BlackBerry 10 OS. The web browser included here is pretty fast and it’s Webkit-based, plus it comes with Flash support and a bottom address bar like IE Mobile. This browser scores 2309 points in Browsermark, which is very, very impressive and higher than any device with WP or Android I’ve tested lately.

The keyboard here is also unique, very, very comfortable to use and it has frets like a guitar. Said frets will have written on them suggestions and if you swipe up, the suggestions will reach the text writing area. You get suggestions for 3 languages at once, by the way. The keyboard will learn your writing pattern by using your messages from the past week. There’s also voice dictation and overall the writing experience is fantastic. 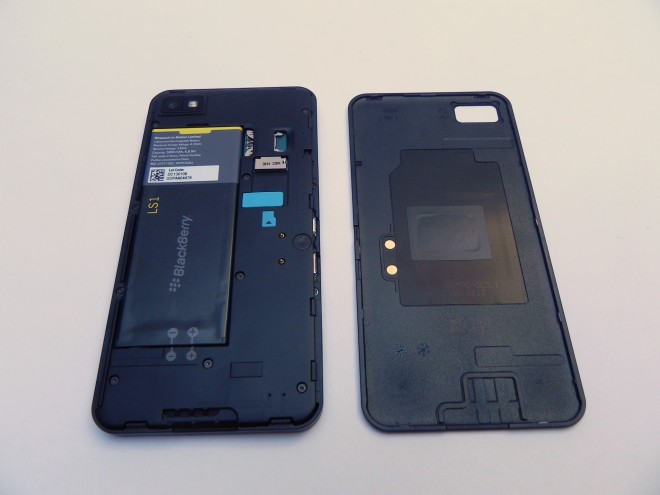 BB 10 OS borrows from WebOS and MeeGo a bit and relies on gestures a lot. For example, a swipe from the bottom to the top will unlock the screen and when you’re in an app, the swipe from the bottom to the top will trigger the homescreen with multitasking thumbnails. Up to 8 apps can be included in that multitasking window and shown as smaller thumbnail previews of the app. When you’re inside an app you can do a slight swipe up in order to have a peek at notifications.

BlackBerry Hub is another interesting aspect, being the place where all the communication is gathered. Here you’ll find texts, BBM messages, emails, Twitter and Facebook changes and missed calls. BlackBerry world is the app store of this platform, that has already reached 100k apps and many of them are taken straight from Android. Among the apps bundled on the phone we find Docs to Go, a pretty solid Office document editing app, Story Maker, Maps (Bing) and in the Settings area there’s a lot of stuff to tweak, as shown in the video review below.

And now it’s time for the verdict. Here are the Pros of the phone: