The US Congress plans on introducing a new law, that requires cameraphones to use a shutter noise each time you take a picture. The bill introduced to the Congress is called the “Camera Predator Alert Act”, which pretty much describes the reason for its existance: camera predators.

Ever seen a girl with a short skirt harassed by a cameraphone dude? 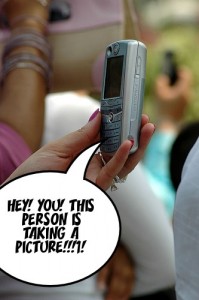 Such laws exist already in Japan and South Korea, so phone manufacturers know how to implement the needed shutter noise. Now, it’s up to hackers to mute it, in order to (probably) catch a few congressmen on photo, while they’re doing something illegal.