We knew that Huawei was preparing a Windows Phone 8 device, the Ascend W1, that already leaked on the web a bunch of times last year. Although Huawei had an event yesterday at CES, they were more keen on Android devices, so the W1 didn’t get a proper announcement. However, the folks of CNET caught its specs on camera, as shown in the picture below. 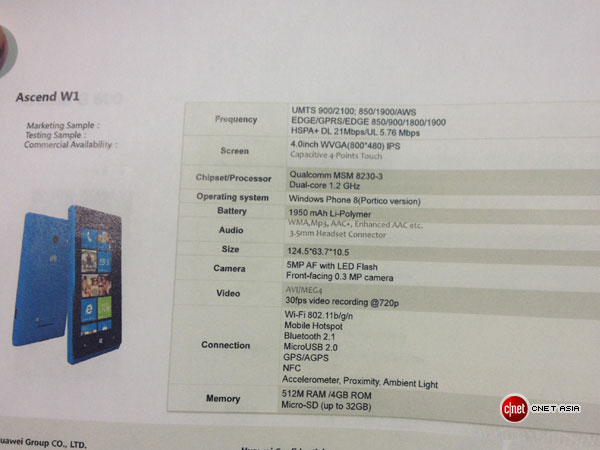 Huawei Ascend W1 features HSDPA+ 21 Mbps connectivity, a 4 inch WVGA IPS display, a Qualcomm dual core 1.2 GHz processor and it runs Windows Phone 8, in the Portico version. Other specs include a 1950 mAh Li-Polymer battery, that’s a pretty generous capacity for a lower end handset. The device has a 5 MP autofocus camera at the back, with LED flash, a front facing 0.3 megapixel shooter and it does 30fps 720p video recording.

It also comes with Bluetooth 2.1, GPS, NFC, accelerometer, proximity sensor, ambient light sensor, 512 MB of RAM, 4 GB of ROM and a microSD card slot. The more interesting bit about Huawei’s Windows Phone-related plans is that the company’s product manager, Richard Bhudhikanok hinted at a Windows Phone 8 phablet for the future, a format that hasn’t really been approached on WP so far.