CTIA 2009 also hosted a Palm demonstration, that showed many useful apps running on the famous Pre handset. Sprint was also there to show its TV service in action and you could also see Pandora, Fandango, FlightView and Nascar apps on Palm Pre. 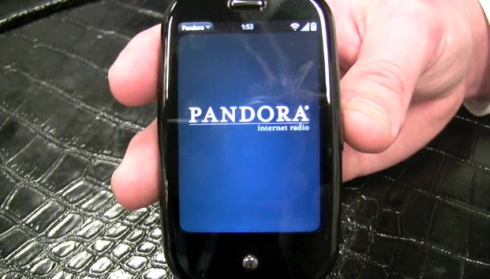 Fancy a streaming radio app with all the quality you can get? Enter Pandora, shown in action below, on Palm Pre, with quite a bunch of neat features, like the notifications bar used as a media controller:

Fandango is a smooth app, with a great UI, that allows the user to find info regarding theatre times and ticket availability, by using the handset’s GPS. There’s even the option of adding a movie to your calendar, for forgetful users:

Pre will be launched exclusively on Sprint, so that means we’ll be seeing a bunch of their services on the handset. Among those, there’s Sprint TV, supporting live video feeds from CCN, Disney, ABC and many more channels:

With the aid of this software, you can check the status of a flight you’re waiting for, get notifications about it and even access a live flight tracker, once the plane departs:

Another neat app is Nascar’s software on the Palm Pre, allowing the user to check out video streams showing some serious car on car action. Minor problems with its features in the video below: