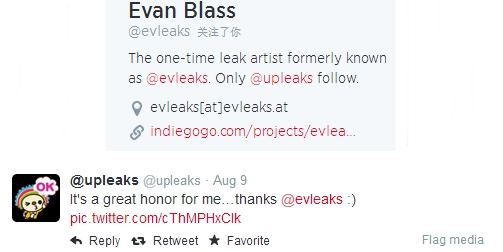 Among the greatest leakers on the web that managed to offer pretty eligile informations and real press renders of smartphone devices there’s also @evleaks. The person behind the @evleaks Twitter account was Evan Blass, a former Engadget and PocketNow editor who revealed its identity a year ago.

Recently, through a Twitter post @evleaks said that @upleaks seems to be a proper follow up to his legacy. As we previously found out, the main reason why Evan Blass decided to put an end to its leaks was the fact that he couldn’t monetize his Twitter stream and his website as much as he wanted.

Yesterday, the @upleaks Twitter account uploaded a couple of first pictures with HTC A11, a device that seems to be a new Desire mid-range smartphone. It remains to see what other leaks is going @upleaks to unveil in the future.

[UPDATE] As Evan Blass notified us, he actually didn’t named @upleaks as a proper follow to his legacy. The comments posted on Reddit misled us and we come up with this info. With this opportunity we’re saying sorry to Mr. Evan Blass and we wish him all the health in the world. We’ll be missing its leaks for sure!