Facebook is reaching scary numbers lately, with people sometimes accessing it more often than Google and we’re bound to reach the 1 billion users mark before 2012 kicks in, we think. Also, TechCrunch’s Michael Arrington is claiming that the company is thinking about making its own handset. 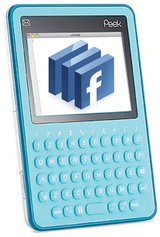 Apparently, they’ll also handle OS development and work with a hardware manufacturer for the rest of the device. The result might be a handset similar to the Peek model, but deeply integrating Facebook contacts and services. Arrington also mentions that two Facebook employees, Joe Hewitt and Matthew Papakipos are leading the OS development.

They have a solid background, with the first contributing to the creation of Firefox and the second working on Chrome OS. Let’s see if this rumor turns out to be true…