A recent survey concerning mobile phone ownership in Finland revealed that Nokia dominates its home market, with 90% of the population using its devices. Samsung places second with a 5% market share and you can find out more details about the popularity of phone models in Finland, by checking out the table below. 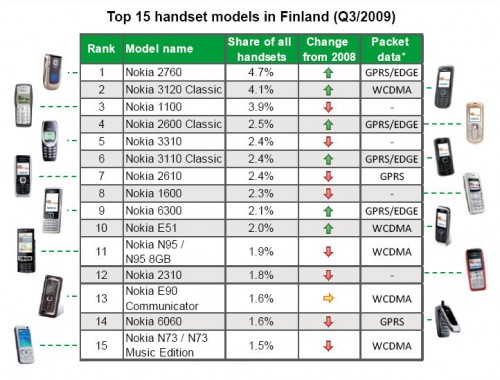 This survey was done by the Helsinki University of Technology and it uses data from mobile networks, collected in September/October 2005-2009. Interestingly enough, the info concerning Apple iPhone usage wasn’t provided, as Sonera refused to. The same study has shown that the use of data modems and embedded data terminals grew from 0.6% to 7.8% by 2009.

As far as mobile platforms are concerned, Nokia Series 40 rules the pack, with 50% of the market, followed by Symbian with 22% and growing.