We’re weeks away from Black Friday, a fact easy to spot if you look at the calendar on your wall, but already there’s a leak showing us some of the hot offers that we’ll get at the end of the month. RadioShack leaked its Black Friday deals, that include some very appealing prices and some hot high end smartphones available for free with contract. 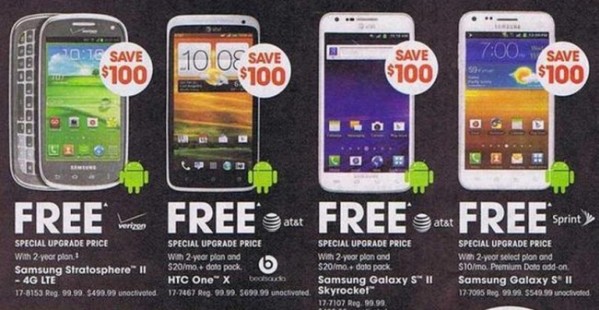 Probably the hottest offer here is a free HTC One X with AT&T 2 year contract, but the Samsung Galaxy S III for $49.99 on Sprint is not too shabby either, also with a 2 year commitment. You also get $10 back in coupons with this model, just like the AT&T Galaxy S III going for $99.99. Galaxy S II also goes for free, as well as the Verizon Samsung Stratosphere II, of course with contracts. The Amazon Kindle Fire HD is listed as priced at $199.99 without contract, if you want a tablet.

HTC Desire C goes for $79.99 free of contract and on Cricket and these are only some of the offers available at the end of the month. The strangest thing on the list is the Samsung Stratosphere II, that’s not even official yet, so it’s definitely coming before Black Friday. Which of these offers will you choose?