It is hard to believe that the news and details about the upcoming Galaxy S IV keep coming in. We’ve had a list of variants and the first official teaser video. Now we can get a glimpse of what to expect in terms of specifications. 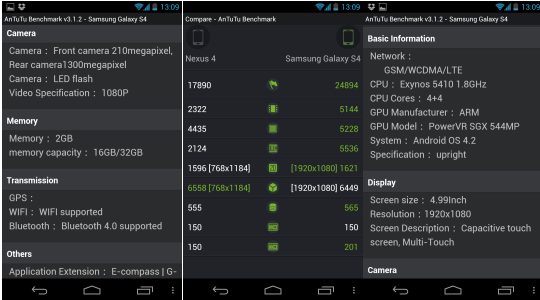 If you’ve been following us for the entire week of MWC announcements then you knw that most manufacturers have announced their flagship devices for this year. Most of these have the basic aspects in common so choosing one it’s a matter of brand and design. For Samsung to release a unique device these days is a very hard task to accomplish so the manufacturer must rely mostly on its fans for the next Galaxy S IV device.

Sammobile has apparently gathered some info in regards of what we might find in the next Galaxy S IV device. As we suspected, the smartphone will be based on the new Exynos Octa 5410 CPU clocked at 1.8GHz that offers extreme performance. The PowerVR SGX 544MP GPU should make gaming a joy on this device and the 2GB of RAM are a bliss for multitasking. The main highlight however is the 4.99-inch Full HD (1920×1080) display and and the 13 Megapixel Camera on the back. In terms of software we can expect Android 4.2 to be shipped right out of the box. Let’s hope all of these are accurate.