Microsoft doesn’t play when it comes to competing with its rivals, even when it comes to the mobile market. Although Windows Phone 7 is yet to reveal sales figures and some say that it’s not even close to matching competition, we’ve heard that the platform’s first update in January 2011 will bring all the needed features to kill iOS and Android. 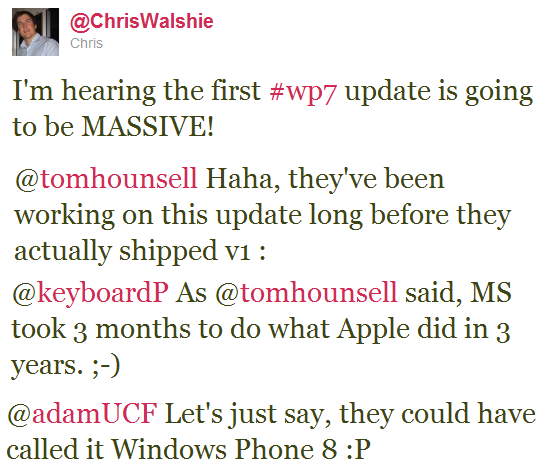 Supposedly, the update brings Bing turn by turn directions, upgrades to the overall Bing experience, custom ringer support, copy/paste and a great multitasking system. This is just the beginning, as Chris Walsh (known from the ChevronWP7 hack) leaked some info on the update, calling it “massive”.

He also says that MS could have called this Windows Phone 8 and that the Redmond giant did in 3 months what Apple did in 3 years. Let’s see if this is all hype or the actual truth.