See the curved phone below? It’s supposed to be a flexible version of the yet unannounced Samsung Galaxy S III, a handset that we were expecting at MWC 2012, but sadly it was confirmed by Samsung for a separate appearance in the first half of 2012. This means that we’ll get no MWC hands on experiences with this phone and we’ll probably wait till Spring to get some specs and pics for it. In the meantime we have leaks such as the one below: 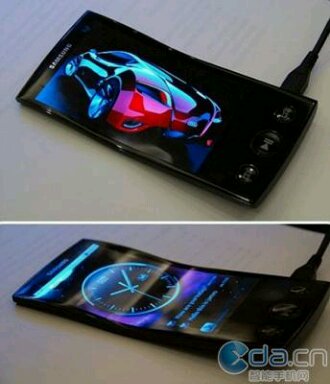 The specs floating around the source site for this leak include a 4.6 inch AMOLED Plus 3D screen, with 1280 x 720 pixel resolution, a 12 megapixel camera, 2GB of RAM and a very slim design. This could be a prototype, a mockup, a photo editing job or maybe just a piece of plastic shaped in the right way to portray a futuristic phone. I say that the future Galaxy S will only bring hardware changes and won’t risk going into uncharted territories, such as flexible body and even 3D.

We saw how crappy the HTC EVO 3D and LG Optimus 3D were in the 3D aspect, so why risk the same mistake with a flagship Samsung phone? On the other hand, if the device is real and it gives the proper experience, it will be solid gold, especially if the battery life is decent, preferably better than the one of the Galaxy S II.