Flickr has just announced the release of several upgrades to its mobile version, among which a new version of their mobile site, viewable on “fancier new mobile browsers”. There’s also a brand new feature, that allows users to view Flickr videos on their mobile phone. 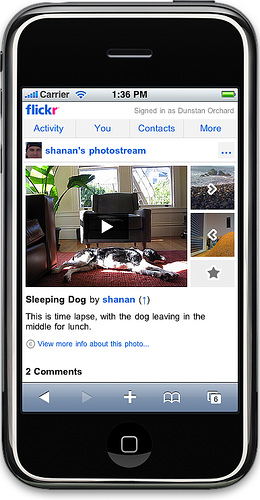 For now, viewing Flickr videos is available only for iPhone and iPod Touch owners, but the number of supported devices will grow as time passes. The activity stream will be synched to the settings from your main Flickr account and also you should know that now you can comment and favorite photos on your mobile.

Plus, managing and adding contacts just got easier, as well as emailing photos via mobile and browsing the “Flickrverse”. There are 3 billion plus photos to check out, so if you test the new features on your iPhone and find something interesting, don’t hesitate to comment on this article.