With all the recent leaks of iPhone 5 parts, cases and whatnot, it was only a matter of time till some skilled team of designers gathered them all and created a mockup. This has been done a lot over the past year and now here comes another attempt, from Bryce Haymond of Blackpool Creative. 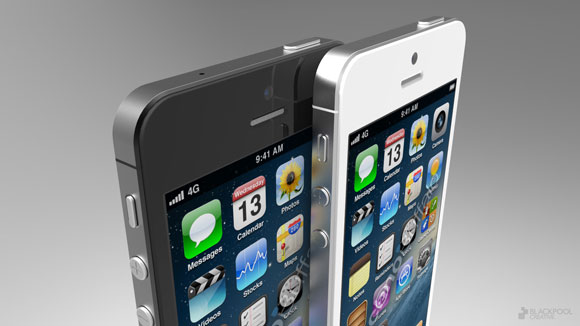 He not only has 76 renderings of the handset available HERE for download, but also the video below, showcasing the 4 inch iPhone. He based his idea on this week’s leaks coming from Asia, showing an iPhone 5 with the same width as the iPhone 4S, but also with a longer profile. With WWDC 2012 starting on Monday, people are still expecting a surprise launch of the new iPhone, so that’s where all the hype is coming from. The consensus concerning the new iPhone is that it will have a 4 inch display, a longer body, the same width as the predecessor, bigger speakers, moved audio jack and smaller dock connector.

The FaceTime came is also moved around and due to the new screen and resolution the user will gain an extra row of icons. There’s also a separated color segment at the central back  area compared to the upper camera side, that goes with a shade of gray instead of black, for example. Will the real thing look anything like this?