The barely announced Samsung Galaxy S IV is expected to hold the crown in front of so many very good offers, coming from LG, HTC and Sony that it almost seems an impossible task to achieve. Still Samsung may yet pull a few As-es from its sleeve. 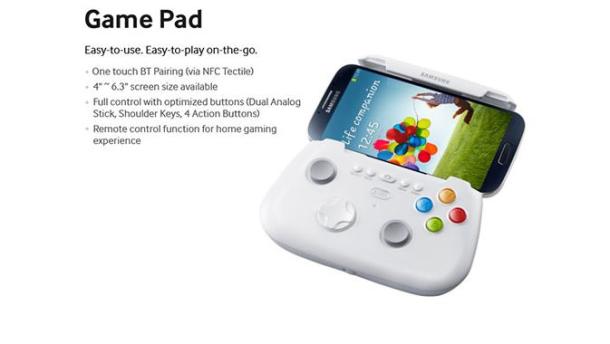 The fact that the Samsung Galaxy S IV can prove a very good gaming experience is a fact that can’t be contested. The hardware configuration composed of 2 x quad-core A15 + A7 chips will surely offer great performance and in terms of quality there is also the same PowerVR GPU found in Apple’s A6 chip. Now what may make it stand out from the crowd is the list of official accessories, including some usb hubs, Samsung has in store for people.

After proving the availability of a wireless charging feature, along with the accessories for it, Samsung is again moving forward to offer yet another very interesting piece of hardware for the S IV. We’re talking about a Samsung Game Pad that can accommodate screen sizes of up to 6.3″ so it may work well also with the Galaxy Note I/II and also maybe Note III. Its design is highly efficient, offering dual analog sticks and also the ability to pare it via NFC. There is also a remote control function for an improved gaming experience.