The unexpected has happened: Google Maps for iPhone is available now and you can download it from iTunes. Google has just released the native maps app for the iPhone, one that’s so fast and filled with features that everyone is tempted to actually call it the best free Maps app for iOS ever. 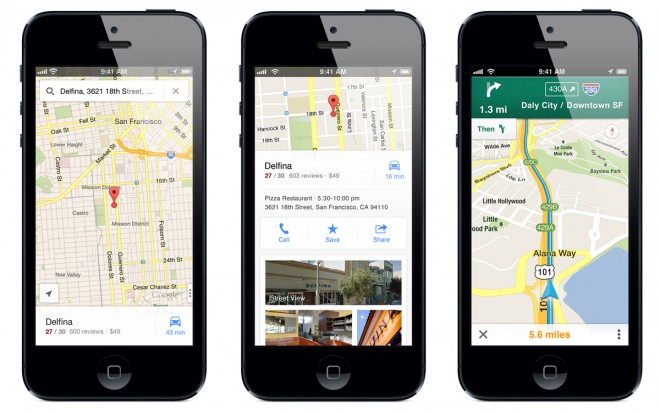 It’s been months since the original Apple Maps launched, filled with problems and eventually generating a letter of apology from Tim Cook and some people getting fired over the problems. The features that matter are all here, stuff like traffic, turn by turn navigation, transit directions and walking directions. Obviously you get the Street and Satellite view, as well as indoor photos, restaurant reviews provided by Zagat and some Google profile integration. This is a fully native app, that relies on vectors and not graphical tiles, meaning it would use up less data and also load up faster.

There are no offline maps available right now, although Google is doing some local caching. For example the transit directions are still kept when you’re underground, which is pretty nice. The app shows more of the map on the screen and comes with rotating 2D and 3D views, plus a search box at the top, that’s the place where you’ll do all the address and POI searching. This will trigger an expandable info sheet at the bottom, showing the address, opening hours and ratings of a restaurant.

Google offers details regarding over 80 million businesses and points of interest. Driving navigation gets to work even if you’re not in the app and Google relies on the iOS Local Notification, offering spoken, turn by turn directions via a notification if you’re in another app. The interesting thing is that Google forgot to integrate advertising in the app, for some reason… Anyway you can download the app from here.