A recent study published by the Pew Research Center has shown that Americans love their handsets the most and as far as ownership is concerned, the report proves that 85% of the people questioned now own a cellphone. The report bears the name of “Americans and Their Gadgets” and it also found that the desktops and notebooks are fighting for the second place, following handsets. 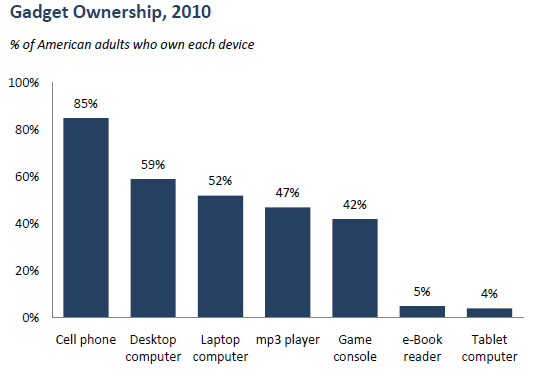 Mobile phones are owned heavily and wanted by young consumers, but surprisingly enough the elderly also have a passion for technology. We’re not the ones saying that, but rather the study, since 58% of the adults 65 and older own a cellphone right now. We’re curious if the majority of them went with feature phones or smartphones, although the former might be the favorite.

As you can see in the image above, e-book readers and tablets are at the bottom of the list with, 5% and 4% respectively. The same study also shows that the ladies prefer the e-book readers, while men are tablet fans. More info can be found in the full report here.