Considered a Verizon response to AT&T’s HTC Aria, HTC Bee will come to Verizon, as it was recently confirmed by a leaked ROM. The picture below shows a press render of the smartphone, looking just like the blurry pictured published on a Russian blog recently. Pocketnow claims that this phone will rely on a QVGA display and it’ll run Android 2.2 Froyo. 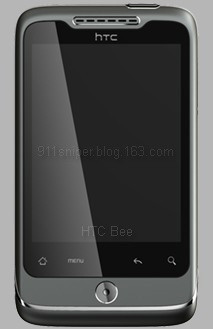 A 528MHz CPU is also added in the mix, together with 384MB of RAM and a 5 megapixel camera with flash. Back to the leaked ROM, it actually mentioned that HTC Bee will be heading to Alltel Wireless, but since Alltel is part of Verizon, this pretty much explains the direction where the device is heading.