HTC Bliss and Kingdom are handsets we’ve been hearing about a lot lately, with the first being a phone destined for ladies, while the latter is an older model with appealing specs and without a launch date. Kingdom has also been pictured previously, although it hasn’t even been announced yet. 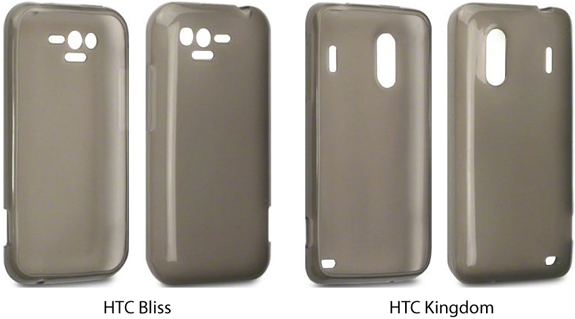 What we have here in this picture is a series of cases made by Qubits and supposedly compatible with the HTC Bliss and HTC Kingdom. It seems that case makers have an advantage when it comes to new products, being granted access to molds of the devices. Kingdom is Sprint material and its specs have been revealed by recent ROM leaks.

This smartphone features a 1.2GHz single core CPU, a 4 inch qHD display, 768MB of RAM and Android 2.3.3. Gingerbread. Bliss is still mysterious, as that female oriented handset that’s coming to Verizon, according to a This is my next tip. And what’s the deal with HTC Glamour, another phone for ladies tipped recently? What’s certain is that they’re not one and the same.