We’ve had the opportunity of reviewing the LG Optimus 7 Windows Phone 7 handset here and we were pretty pleased with it, to be honest. Now, we’ve got another handset with the same OS on our hands and you must’ve watched its unboxing over here, that also showed a couple of its defects. 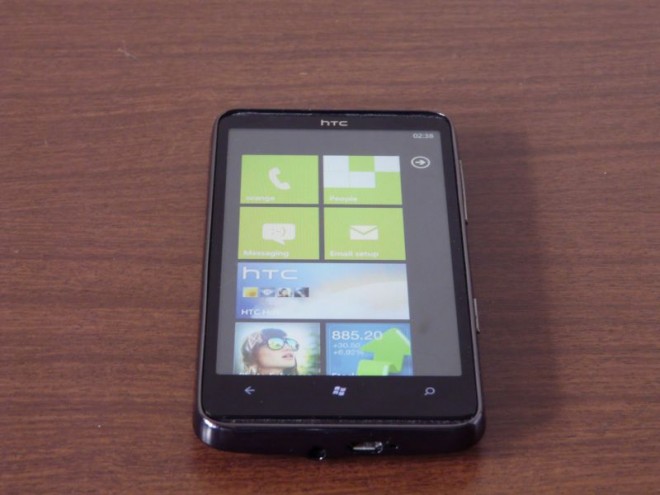 One of them was the poor plasticky battery case, that’s pretty hard to remove, especially if you don’t have long nails. Also, the battery pulling system is pretty original, with a strip of fabric underneath it, but well, that’s not the worst point of the handset. At least the 5MP camera takes decent pictures and you must know it comes with autofocus, dual LED flash and geotagging.

720p video capture is also enabled and the lack of a secondary camera is something we’re already used to in Windows Phone 7. Under the hood of the smartphone there’s a 1GHZ Scorpion CPU, accompanied by an Adreno 200 GPU. The phone measures 11.2mm in thickness and switching from the iPhone to this huge smartphone, you’ll feel the size difference, mostly when it comes to that 4.3 inch display.

This screen supports a 480 x 800 pixel resolution and it responds pretty nicely to your commands. You get 8GB of memory on the handset, in the European version (which we got) and 16GB in the Asian one. The device supports WiFi, although we had a hard time connecting to some WiFi hotspots, while a Nokia C3 unit nearby aced it and even found more hotspots.

The Bluetooth connectivity is also a problem, so a couple of Samsung and Nokia models we tried to connect with the HTC HD7 simply didn’t work. In case this model looks familiar to you, know that it’s considered a direct successor to the HTC HD2, so you know who to “blame” for the design. We’re pretty disappointed with the sound quality on this handset, focusing on the speaker at the back, the one covered by the kickstand (we did lift that up, don’t worry).

Sometimes it just wasn’t loud enough to provide an enjoyable movie watching experience. However, I have to say that video quality was impressive, provided that you want to wait for Zune to try and convert a huge .avi file into something watchable on your HTC. At least syncing went fine, Internet Explorer was easy to use, in spite of the lack of Flash and limitation to a mere 6 tabs.

Of course, the Zune Player and camera interface were the strong points of the device and usually strong points of al WP7 devices. Photos are easy to take, the effects are many and great to use, while Zune will make music playing a fun and intuitive experience, complete with album artwork and all. Overall, HTC HD7 is a good phone, but it doesn’t match the quality of the LG Optimus 7, at least when it comes to build, design and volume level.

We absolutely fell in love with the HTC Hub, a replacement for the HTC Sense interface usually applied to Windows Mobile till now. One look at the Weather effects on the HD7 and you’ll love the device, too!