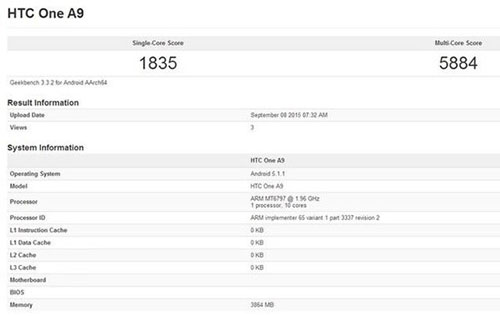 Not long ago we found out that the Taiwanese company HTC plans to make a big announcement on September 29, a day when the HTC One A9 could be officially released. If you’re one of our readers who already are familiar with the subject, then you already know that this upcoming device is supposed to be a flagship replacement for the failure called HTC One M9.

After a couple of blurred pictures with this device, today we get a screenshot with phone’s specs, details leaked through Geekbench 3. As you can see, HTC One A9 will arrive with a 10-core processor made by MediaTek, more precisely a MT6797 CPU, chip clocked at 1.9 GHz.

In the same time, Geekbench 3 reveals the presence of a 4 GB RAM memory chip and Android 5.1.1 Lollipop as default operating system. Even if these specs seem to be a little bit too out of ordinary, we think that HTC will indeed choose a high-end chip from MediaTek, this after it got burned with the Snapdragon 810 one found inside the HTC One M9 flagship.

Some publications are suggesting the fact that this new device will bring a 5.5 inch Quad HD display with 2.5D Glass on-top, a rear camera with support for RAW-captures and stereo speakers. Its price might be around $500-$600 if we’re to belive the rumors.