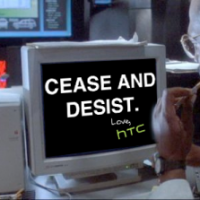 You might have noticed that leaked ROMs are something that we see every day on the interwebs, but HTC wants to put a stop to this phenomenon. They threatened to take action against handset hackers who distribute ROMs, specially those who gather all of the ROMs in a single place, like the Shipped-ROMs site.

This website recently received a Cease & Desist order from HTC’s Legal Counsel, with the Taiwanese handset maker claiming that Shipped-ROMs is “illegal copying … HTC’s original art work.” The term “art work” might sound a bit funny, but it’s used to define the code and software developed by the company.

The site we mentioned is operated by famous hacker Cornflipper, a name we’ve heard quite a lot recently. Also, this initiative is only a month old, so HTC is moving very fast, in order to close down Shipped-ROMs, that managed to gather ROMs for the majority of HTC handsets available.

Usually, leaked ROMs are good news, as they allow the hacking community to add in or unlock extra features, however HTC is right to protest, since it’s their intellectual property that’s being hacked.