After Nokia and Samsung started the wave of unveilings related to the Windows Phone 8 debut, it’s time for HTC to take a stand. The Accord model has been leaked a lot lately, especially in pictures that actually look nice and yesterday there was also an official name leaked for the device: HTC 8X. Now we have a fresh batch of rumors that details all 3 upcoming WP8 models from HTC: Accord, Zenith and Rio. 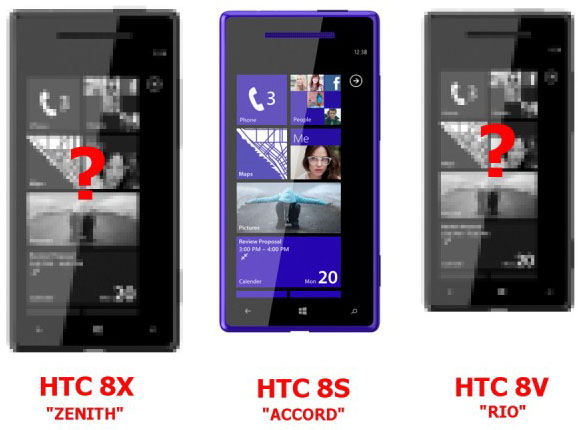 First things first, their codenames! Zenith will actually end up being the HTC 8X, while the Accord will be HTC 8S and Rio will be HTC 8V. HTC is preparing a September 19th event and while some want to see their phablet or a new tablet there, they will probably unveil this Windows Phone 8-based trio. The family of devices is dubbed HTC 8, with the figure being the common name of the new products. HTC 8X will be the flagship, while the HTC 8S will be a midrange phone and the 8V will be an entry level unit.

Obviously, you should take the rumors with a grain of salt, but they do seem solid this time.