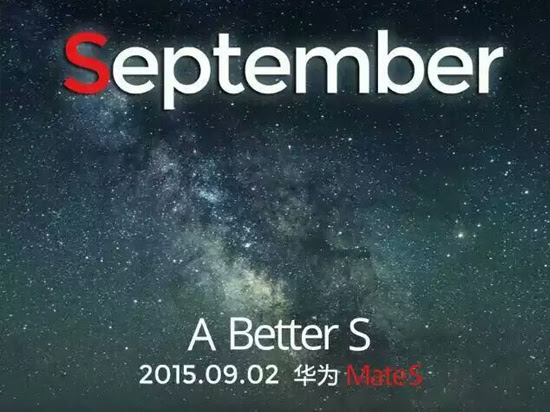 We know from some time that Huawei is getting ready for launching  a new device during IFA 2015, a trade show that every year takes place in Berlin at the very beginning of September. If at first, these rumors were talking about Huawei Mate 8, we later arrived to the conclusion that Huawei will release a better variant of the Mate 7 instead and not the Mate 8.

Well, through some teasers we get the chance to know what name will wear this device. Apparently, the new phone will be named Huawei Mate 7S, and it will be applied to either a more powerful Mate 7, either to a 4.7-inch compact phone that will keep the same uni-body metallic design.

If indeed there’s a compact variant coming, then we’re expecting to see a 4.7 inch device with Full HD display, octa-core HiSilicon Kirin processor, 3 GB of RAM memory and a 13-megapixel rear camera sensor (IMX278). These specs were unveiled by AnTuTu, and according to them, the phone runs Android 5.1.1 Lollipop.