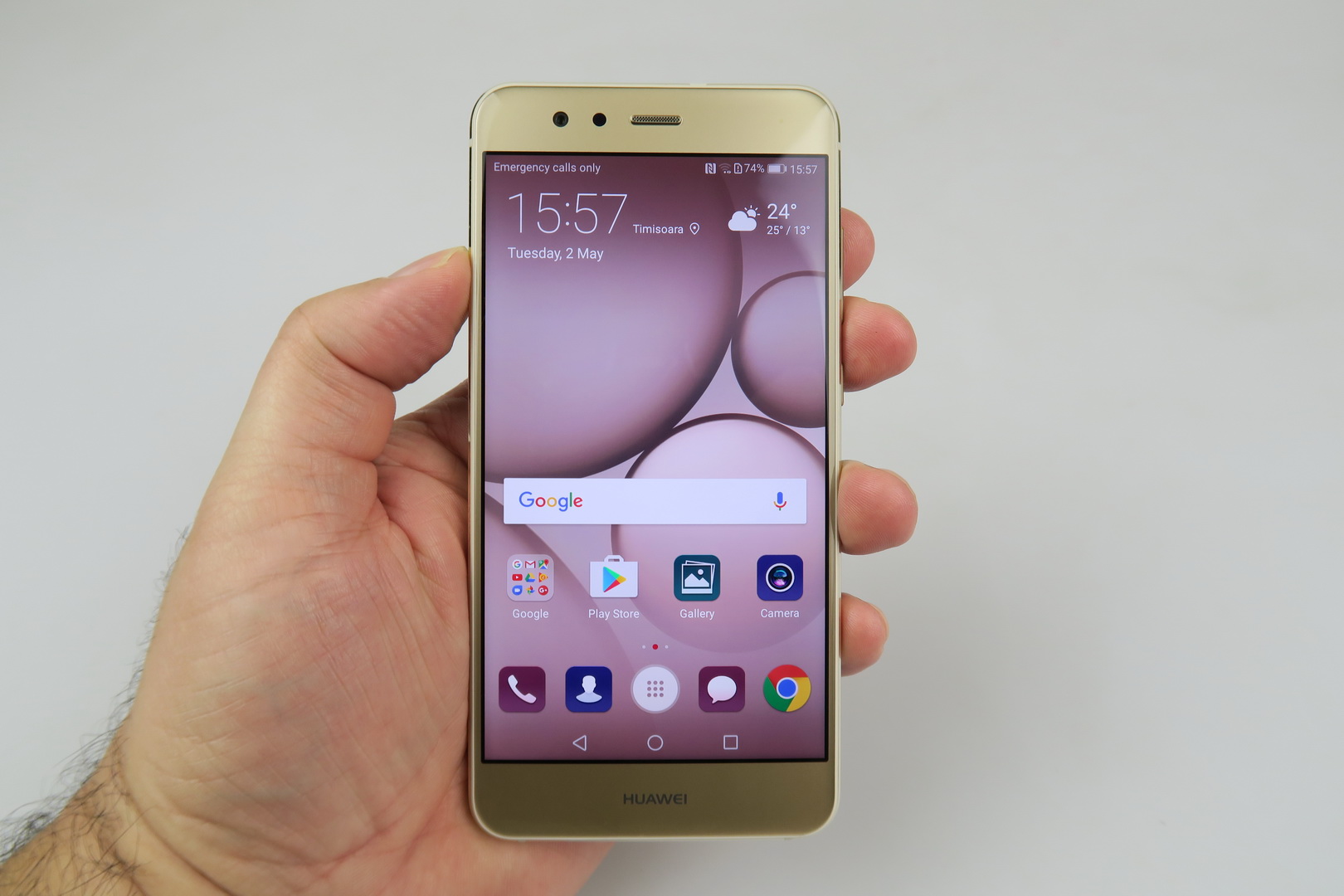 Huawei P10 and P10 Plus are still the best bang for the buck flagship phones of 2017, well unless you count the Xiaomi Mi6 of course. That’s why a Lite proposition that draws its inspiration from these products is at least interesting. We reviewed the Huawei P10 Lite recently and found it to be a pretty solid midrange phone. You can find out why after the break. 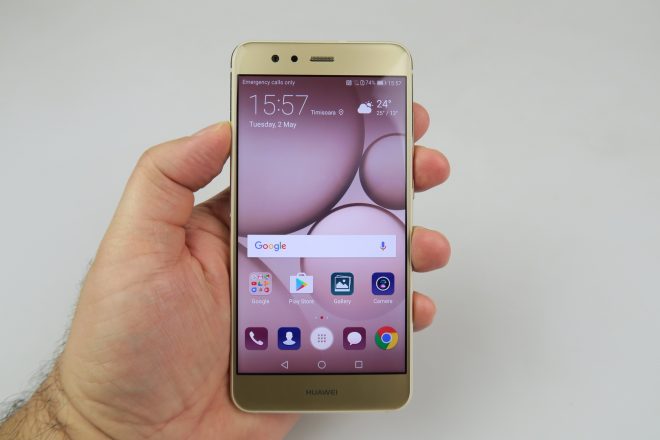 Priced at $329 on Amazon, this machine debuted in March this year and it’s a follow up to the excellent P9 Lite from last year. It’s a glass and metal handset, available in black, blue, white or gold and it goes head to head with the Galaxy A5 (2017) and the ASUS ZenFone 3. While the P9 Lite had a polycarbonate back, this smartphone opts for the a metal frame and a glass back and front.

It’s not as curved as its rivals and I’m talking about the sides and even the screen edges, so it opts for a more serious and angular approach. Huawei P10 Lite measures 7.2 mm in thickness and weighs 146 grams. This is not bad compared to the 145 grams of the Huawei P10 and its 7 mm waist. By the way it’s also 1 gram lighter than the P9 Lite and 0.3 mm slimmer. 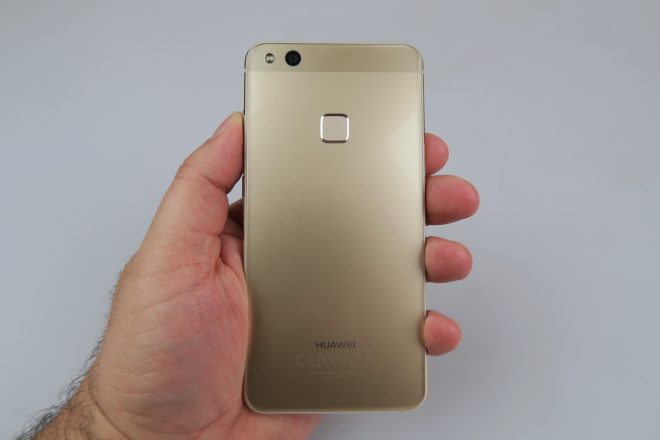 The phone provides comfy one hand usage and its buttons offer good feedback. The back side is not a fingerprint magnet, which is good news for a glass surface and this applies to the gold version we tested at least. Huawei P10 Lite feels like a very light phone, even lighter than its listed weight. It’s pretty premium for a midrange handset, priced at $300.

Moving on to the screen, we get a 5.2 inch Full HD IPS LCD panel, with 1.21 mm thick edges and a 1500:1 contrast ratio. The video player on offer here offers a Pop Up Play feature, Enhance Audio and speed setup. The viewing experience involved OK brightness and colors, a contrast that’s not that bad and wide view angles, at least horizontally. Vertically I was a bit let down by the angles. 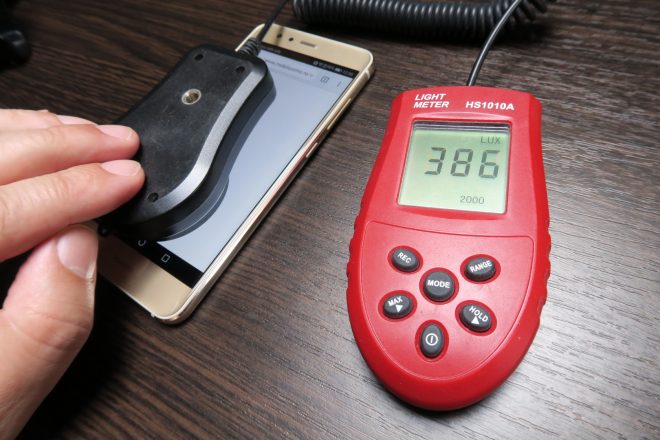 Pixels have an RGB Stripes setup and I liked the white of the screen better than the one of the P9 Lite (2017). We did a brightness test, achieving 386 LUX units, which is quite OK and superior to the Huawei P8 Lite and LG G5. This also means we scored below the Huawei P10 and P9 Lite (2017), plus the P9 Lite itself, that had 443 LUX. In the end brightness could have been better, but it’s also quite OK the way it is.

Settings for the display include font size, eye comfort (remove blue light), brightness and color temperature. Increasing sunlight readability is another option available in the Settings. Moving past the screen, we get an octa core 16 nm processor, the Kirin 658, clocked at up to 2.1 GHz and with a Mali T830 MP2 GPU in the mix. There’s 3 or 4 GB of RAM here, 32 GB of storage a microSD card slot. 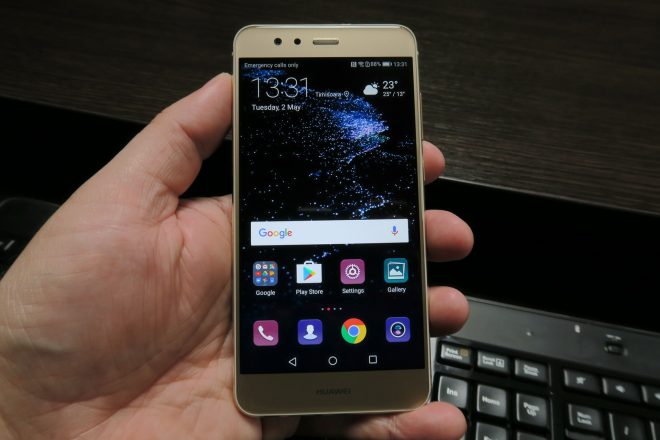 We didn’t experience any lag and the apps started fast. We queued a lot of them, played games and encountered no delays. Games like Riptide GP Renegade or C.A.T.S ran fine, so there’s no problem with gaming. We also did a bunch of benchmarks and in Quadrant we went past the ASUS ZenFone Zoom and Xperia Z3, while we also kept below the LeTV 1S and Motorola Moto M.

In AnTuTu 6 we achieved a higher score than the Huawei P9 Lite (2017) and Moto M, but scored below the Moto Z Play. Finally, in 3DMark Ice Storm Unlimited, we went past the Sony Xperia XA and scored below the Huawei P8 and P9 Lite, which means the graphics aren’t quite future proof here. In GeekBench 4 we surpassed the ASUS ZenFone 3 and Huawei Nova, so overall the benchmarks were OK, but this won’t be much of a gaming machine in 2 years. 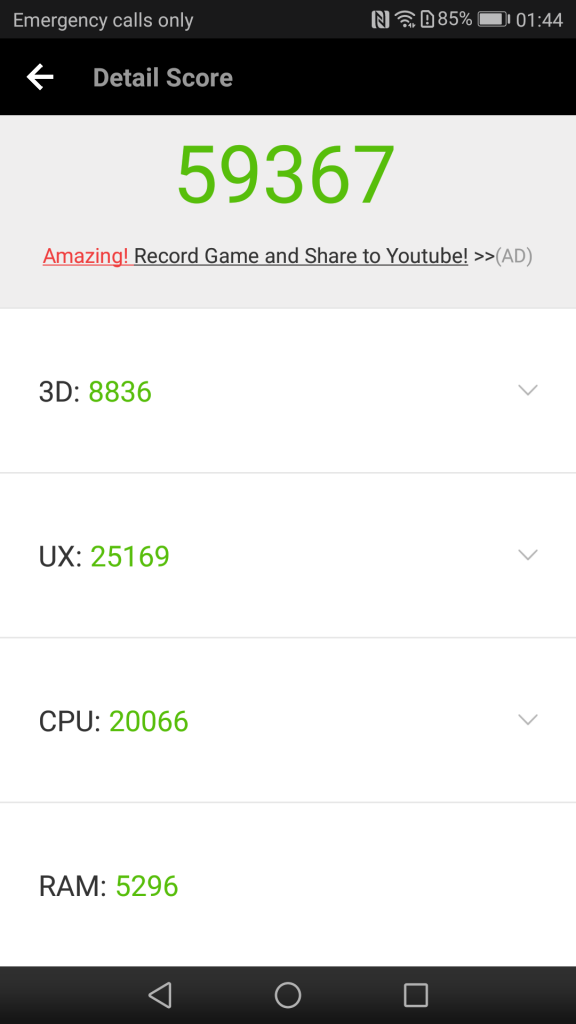 We also did temperature tests, achieving 34.8 degrees Celsius after running GFXBench and 38.9 degrees after running Riptide GP Renegade, so there’s no overheating. As far as the battery goes, this phone comes with a 3000 mAh unit and 18W fast charging. Its video playback time, measured by us clocked at 12 hours, which is quite good and surpasses the iPhone 6, but also scores below the iPhone SE and Huawei P9 Lite (2017). 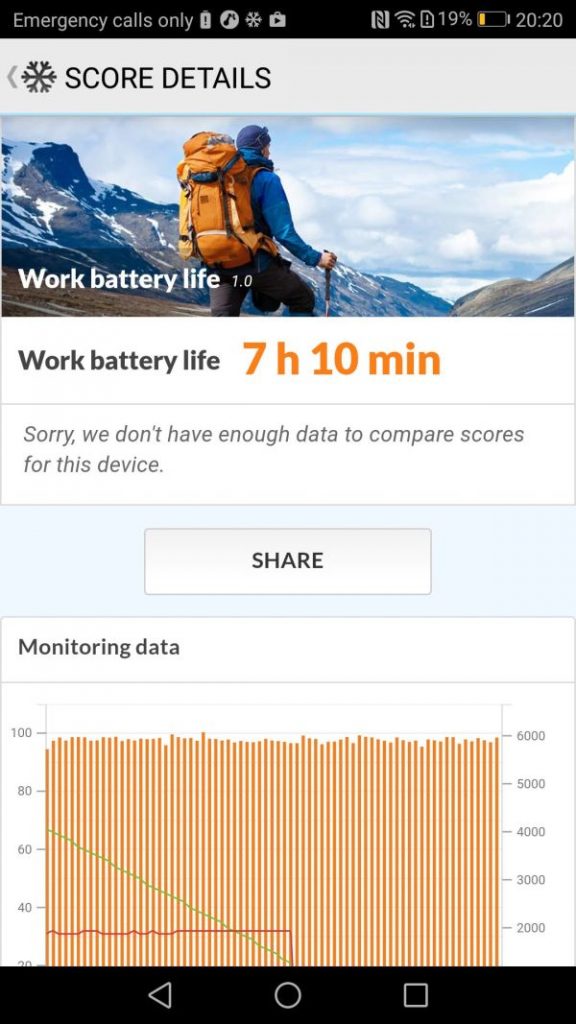 In PCMark we reached 7 hours and 10 minutes, which is rather OK and superior to the Huawei Honor 8 and HTC 10. We also scored below the Huawei P9 Lite (2017) again and the Lenovo Vibe X3. Charging is done in 2 hours and 24 minutes, which basically beats the Xperia X Compact’s time. Still, the first minutes of charge are quite efficient, since 5 minutes equal 9% and 15 minutes 23%. 30 minutes mean 42% and 1 hour 79%.

Battery Settings include WiFi on during sleep, the option to close excessively draining apps and Power Saving Modes, including an Ultra Power Saving one. There’s also the option to lower screen resolution and an Optimize feature. In the end the only thinb you have to remember is that this is an upgrade from the Huawei P9 Lite’s battery, but also not a match for the excellent P9 Lite (2017). 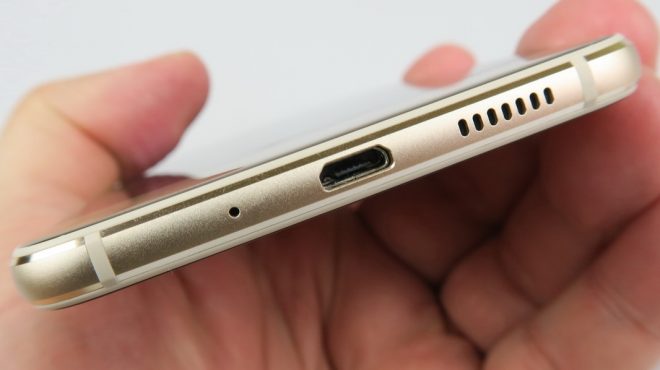 As far as audio is concerned, we only get one speaker at the bottom, a SWS option in the music player and a pretty OK volume when listening to music. The bass was good, there was no distortion or vibration of the handset’s back side. The voices and guitars were well rendered. We also did a decibelmeter test and achieved 86.6 dBA with our acoustic sample and 91.7 dBA with the multimedia playback (videogames).

This means we surpassed the P9 Lite with the first test, but scored below the P9 Lite (2017) with the second one. We’re also below the Xperia XA and above the Huawei Mate 8 (first test). The headphones are rather typical and similar to what we’ve been getting ever since the Huawei P8, not very comfy, plasticky, but offering an OK volume. FM radio is also here. 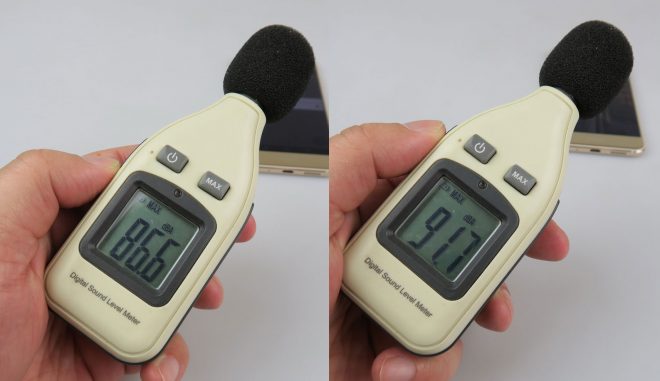 Time to discuss the camera! We’re dealing with a main 12 MP shooter with a 1/2.8 inch sensor, PDAF and CAF. It also has F/2.2 aperture and 1.25 micron pixel size. Upfront there’s an 8 MP shooter and the camera itself starts up fast and takes pictures reasonably fast. Options are typical for a Huawei device of the past one or two years. I’m talking about Beauty Mode, Color effects, resolution, GPS, grid, timer and audio control. 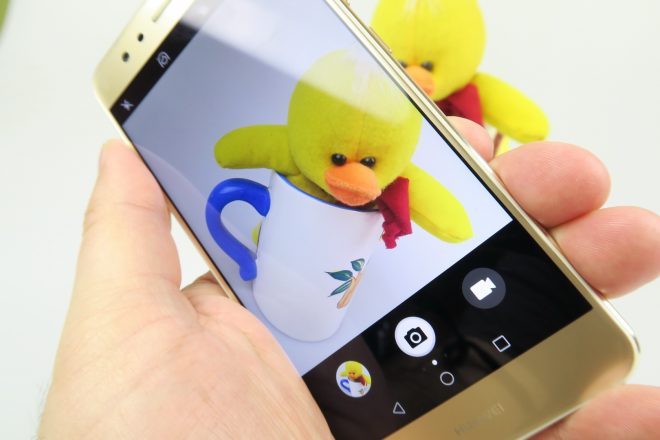 The Pro mode offers tweaks for focus, white balance, exposure, shutter, ISO and metering. The gallery of shots taken during the day was done on a sunny day of May and the results were bright, clear and it all felt less burnt than the P9 Lite. Colors and focus were quite good and even when zooming in details were solid. Selfies were a bit underwhelming, which surprised me, because they were inferior to the P9 Lite and the P9 Lite (2017). 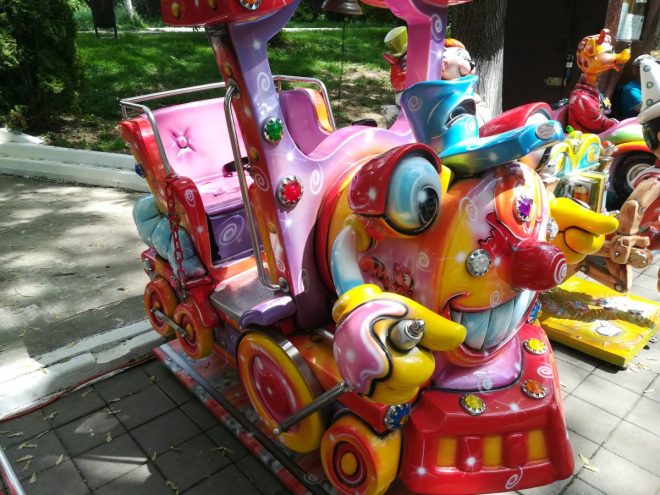 They were a bit too blurry on this phone. We also caught some good closeups and nice landscape shots, well detailed. Panorama had a resolution of 9984 x 2304 pixels and the lighting was good, plus the toys in the park had solid texture. One of the major achievements here is that this phone is able to capture better green hue than the P10 Plus. 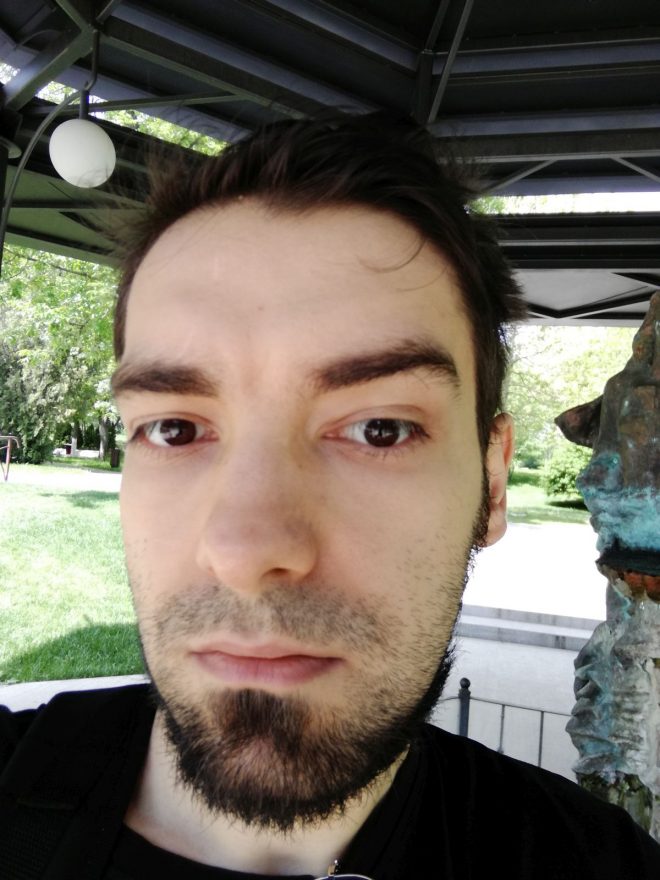 The Huawei P10 Lite manages to handle even the strong sun in front of it. The colors were more realistic and well calibrated this time around, compared to the P9 Lite and P9 Lite (2017). I would say it can fight the Huawei Nova and ASUS ZenFone 3 with ease. It can also compete with the Galaxy A5 (2017), but that one has a boost in details and clarity.

Low light captures can be seen here and we registered long street light halos. The flash was bright and I was happy with the lighting and clarity. Colors were preserved in their natural state pretty well and we did experience some blur here and there. It’s superior to the Huawei P9 Lite and if you zoom in you’ll see some detail loss. The texture was rather good for the capture of this handset, during the night, but it all feels inferior to the ZenFone 3.

Video capture during the day was done in MP4 format, Full HD resolution, 29 FPS and 17 Mbps. The capture was burnt, the microphone can’t seem to handle the wind, but when the wind is gone we caught some nice ambiance, with people walking around the park and children chatting. Clarity is OK and details are rather poor in the distance, if you look closely at the leaves of the trees.

Somehow in spite of the poorer details, if you zoom in things are kept pretty clear. The image is shaky and electronic image stabilization doesn’t seem like much here. At least the colors don’t feel as burnt as we’ve seen on the Huawei P10 Plus. We didn’t break records here, but we did improve the colors and exposure of the Huawei P9 Lite. In the end it’s not far from the P9 Lite, but the upgrade is real.

Low light video capture brought us a pretty good object tracking and some details were lost when zooming. Street light halos are once again elongated and there’s some grain, but not as bad as you’d expect. Once again stabilization was modest , but the focus is OK. I’d say the P10 Lite films better than your average Chinese handset. Moving on to other things, we used Chrome as the web browser here and it was quite fast.

The benchmarks we pulled on it offered mid level results. We also had Swiftkey for input and used a numeric row. On the connectivity front, there’s dual SIM, 4G LTE, GPS and Glonass, Bluetooth 4.1, WiFi b/g/n, microUSB 2.0 and NFC. The slots are nano SIM ones and we are promised up to 300 Mbps in download. The dialer offers a harassment filter, Pocket Mode and Speed Dial. 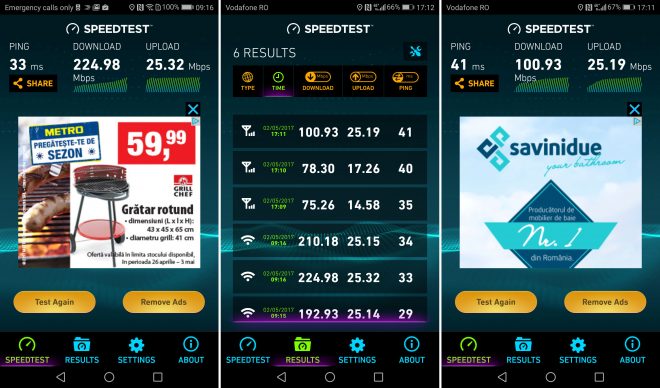 Calls are loud, the mic is good and the signal was strong. We did a SpeedTest as well and achieved 100 Mbps on 4G download and 25 Mbps on upload. WiFi was excellent with 224 Mbps download and 25 Mbps upload. On the OS, UI and apps front we’ve got the familiar EMUI 5.1 on top of Android Nougat. Basically, what you saw on the Huawei P10 and P10 Plus also applies here.

We’ve got a black and blue dropdown area, that seems inspired by iOS and Samsung’s Grace UX from Note 7. The multitasking is done via carousel, the notification area is wide and if you keep the homescreen pressed, we can access the wallpapers, widgets, transitions and settings area. You can tweak the layout, alignment and loop the homescreen. 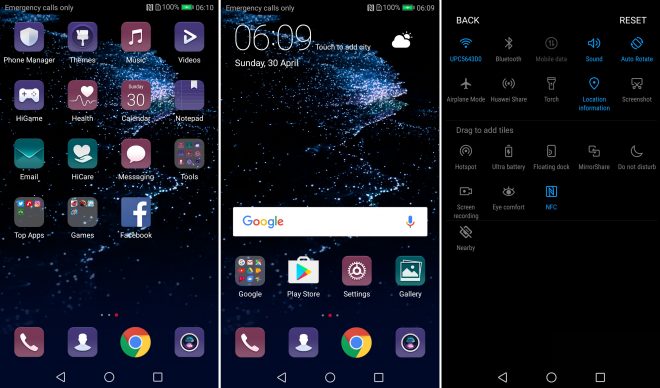 All the widgets are mostly stock here. One can opt to use the device with or without an app drawer. Settings let you modify the nav bar, DND feature, floating dock, motion control, knuckle gestures and split screen is also here. One Hand UI, voice control, Simple Mode and App Twin also make the cut. The fingerprint scanner was also analyzed by us, letting you take a pic, answer calls and browse pics.

It has a 5 step setup and unlocks the device quite fast, but not flagship level fast. On the preinstalled apps list we found 53 names, which is quite a lot, but at least you can uninstall quite a few of them. Among the preinstalled apps we find a Phone Manager, Themes, Health, Notepad, Instagram, News Republic and HiGame. And now it’s time for the verdict! 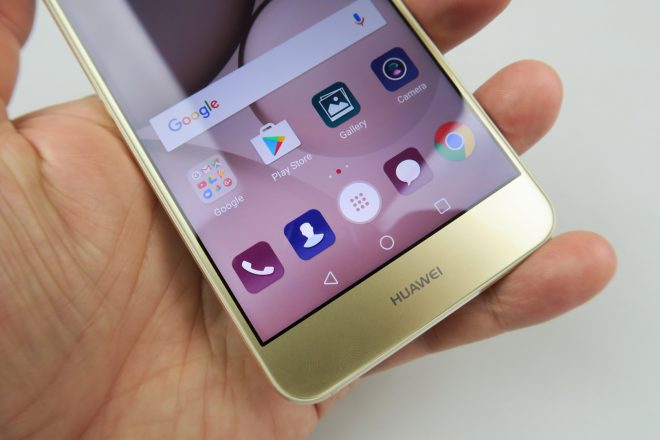 Here are the Pros and Cons:

Overall, this remains an upgrade from the Huawei P9 Lite in some areas, like the battery and camera, plus hardware, of course. The screen is better than the one of the P9 Lite (2017), because it has a better white, even though it’s less bright. Performance is solid and there’s no big drawback here. A midrange good for music listening, video watching and the usual pics and vids.

Considering it even compensates for some P10 Plus camera drawback, I’d say it’s a very good midrange alternative. The device is up for purchase here.