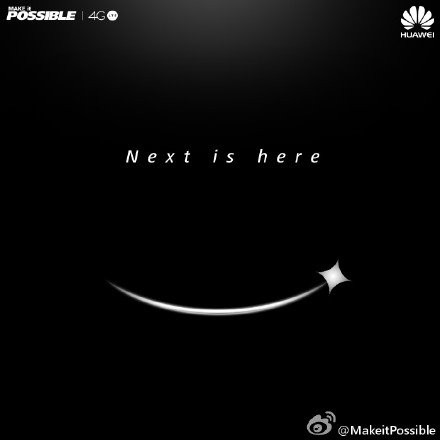 Huawei usually opens up MWC 2015 with the first conference on a Sunday, but this year many companies have decided to debut their products on the first day of the show. Meanwhile, Huawei published a poster for MWC 2015, saying “Next is Here”.

We’re expecting to see a few products from Huawei at MWC, including 3 bracelets/watches according to previous leaks. The P8 flagship may or may not come to MWC, according to rumors. The curved contour from the poster may hint at a curved or curving device, in the vein of the LG G Flex maybe. Or it could just be a hint regarding the TalkBand B2, that was already confirmed for MWC 2015 release.

Huawei is also ready to launch its Honor X2 model, that will adopt a 7 inch Full HD screen, a HiSilicon 925 processor, 3 GB of RAM and a 5500 mAh battery. The TalkBand B2 bracelet may come with a curved OLED screen, sleep monitoring features and call features, possible with a detachable Bluetooth headset. Huawei has a press conference scheduled on March 1st at MWC.