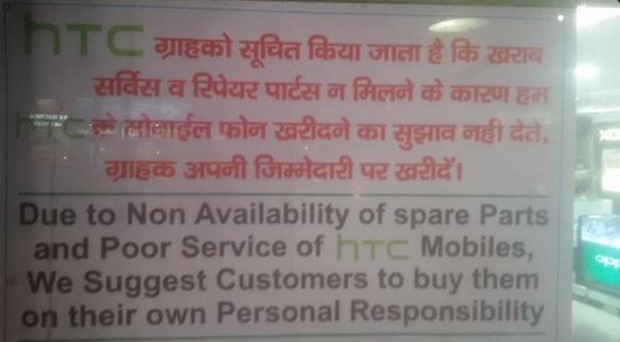 HTC isn’t doing very well on the Indian market and now it has one more reason to worry about this part of the world. Local retailers are leading an anti HTC campaign, that involves posters like the one below.

Such posters were spotted in the city of Delhi, complaining about the lack of spare parts and poor service from HTC. Retailers even suggest that the customers buy the handsets on their own responsability. Consumers in India have been complaining about the overpriced HTC phones for a while now, but this is a whole new level of trolling and protesting.

It’s true that you can’t sustain a solid phone business, if you don’t service your products properly, which HTC doesn’t seem to be doing here… That’s not an isolated case, since a few Delhi retailers have put up such posters, advising people to not choose HTC phones. Officially HTC denies any issue with the company’s after sales support and claims it may be an attempt from rival brands to spoil their image.