Apple fans in China will be glad to know that the iPhone 4S is finally coming to their area this month… Chinese regulators have at last issued the necessary documents to allow the handset to be sold regionally. MIC Gadget is claiming that earlier this week the Chinese Ministry of Industry and Information Technology signed the needed papers to greenlight this initiative. 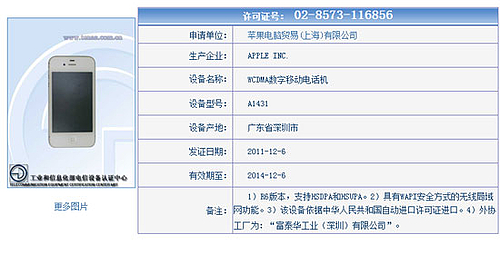 The iPhone 4S received a Radio Transmission Equipment Type Approval Certificate, that allows it to be sold in China for 3 years. There are now no hurdles in starting the process to get the handset in shops and make it a hot item this Christmas. China Unicom plans to launch the phone later this month, since it has already finished the preparations to launch the product from November. The carrier plans to offer the 16GB model of phone for 4,999 Yuan without contract, translated to about $786.

If the newest iPhone debuts in China before the end of December, the impact on the global sales of the handset will be so big that analysts will have to update their estimations. Last I heard, about 28 million units were predicted for sale in this quarter by JP Morgan. Conquering China with this product will probably add a couple more millions to the quarter’s outcome. ASs you know China has the largest population in the world and the iPhone will be made available in 7000 locations around the country. China has 600 million mobile subscribers, so it’s a huge market to take advantage of.