A benchmark scored registered on Sunday with the Geekbench test shows mentions of the iPhone 5 outperforming each and every iOS and Android device on the website. The benchmarking service logged a score of 1601 from an iPhone 5,2, that ran iOS 6.0 on a dual core ARMv7 processor at 1.02GHz with 1 GB of RAM. The identifiers can be messed with, of course, but the specifications fit previous speculation regarding the Apple A6 SoC. 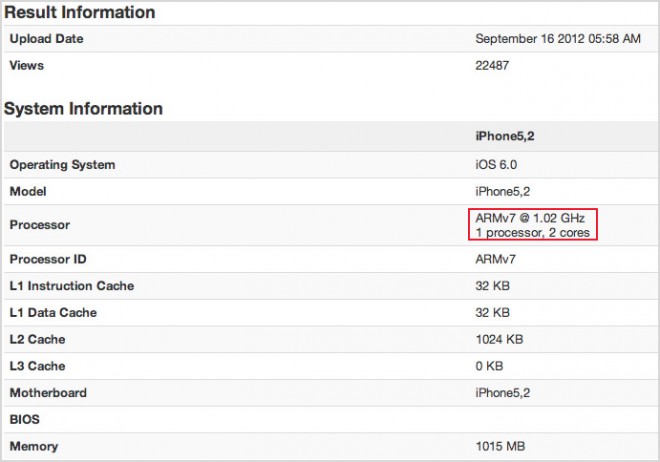 They said that it comes accompanied by 1 GB of DRAM and uses an ARMv7 CPU with custom cores. If the results are legit, the iPhone 5,2 score beats all the Android devices, including the Nexus 7 and Samsung Galaxy S III. No other iOS device out there even surpassed 800 points, so it’s even more impressive. The iPhone 4S scored 631, while the iPad 3 reached 734 points. Last Wednesday, when the iPhone 5 was announced, Apple Senior Vice President of Worldwide Marketing Phil Schiller said that the new A6 chip doubles the processing and graphics performance of the A5 SoC.

He also promised an increase in battery life, that is now 8 hours of 3G and LTE talk time and web browsing. Many people believed at first that this was in fact an Apple A6 quad core CPU built by Samsung on the 32 nm fabrication process, but it was not, apparently. It only holds two processing cores, running at a higher clock speed than the A5. The exact configuration is not yet clear, but as usual I expect the guys doing the teardown in a week or so to clear the issue.