Emblaze Mobile is surely not one of the big players in the mobile phone industry, but the Israeli company has big plans for the future, as they’re getting ready to release an iPhone rival. And not any rival, but one with a 480 x 854 pixels touchscreen display. In fact, the company’s working on 2 handsets right now, one of them being called Emblaze Edelweiss. 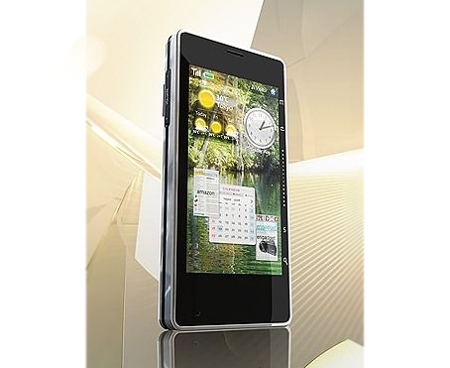 Edelweiss is the one with the 3.5 inch TFT touchscreen display mentioned above, which pretty much tops the resolutions of HTC Touch HD, Sony Ericsson Xperia X1 and of course the Apple iPhone 3G. The handset will also feature GSM and 3G connectivity, internal GPS and 8 GB/16GB built in memory.

Turns out that we’ll be seeing this phone on the market in Russia first, in October under de branding of MTS, the leading local carrier. The other phone that Emblaze is working on is called Monolith and it will also involve the contribution of the Japanese company Sharp and Access (software developer).

The Monolith will use a Linux-based platform, also including a touchscreen display, GPS, web browser, varied connectivity and multimedia features. Apple iPhone who?