After seeing the MoPhO artists in action, singing with the aid of iPhones and a couple of accessories, here’s another musical initiative that relies on Apple’s handset. I’m talking about the Leaf Trombone World Stage, a music app and a game, but also a social experience. 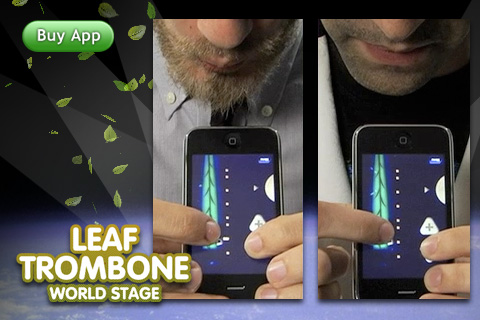 Just blow into the iPhone or use touch mode on the iPod Touch to create music. There’s also a platform for you to toy with, allowing Leaf Trombone players from all over the world to listen to other people’s compositions and even rank higher as a player. There’s also an online Composer and the chance to share your music, videos and performance tips via the Smule Forums.

In order to play Leaf Trombone you’ll have to blow into the iPhone’s microphone, or in Touch mode just touch the screen and press on the leaf to play a note. As you slide your finger towards you, the pitch will get higher, just like in the case of a real trombone. Here’s the app in action, in the video below: