Home Android Leagoo Elite 4 is a Solid Handset for Below $80 With an...

Leagoo Elite 4 is a handset that has a very impressive price, seeing how it’s an elegant device with 4G LTE connectivity on board. We had a very impression about the Leagoo Lead 1, when we tested it, so we imagine this newcomer keeps the impression intact.

We’re dealing with a 5 inch handset here, one that runs Android 5.1 and offers 4G LTE connectivity. We’re also getting a quad core MediaTek MT6735 processor inside, clocked at 1 GHz, accompanied by 16 GB of storage and 1 GB of RAM. This model offers a qHD resolution on the 5 inch screen and relies on a Mali T720 GPU. At the back there’s a 5 megapixel camera, that can do 8 MP shots through interpolation.

Upfront for selfies there’s a 2 MP shooter, that can reach 5 MP via interpolation. Bluetooth 4.0 is in the mix as well, plus HotKnot, dual SIM slots and an ultra narrow frame for the LG made screen. This Leagoo model is quite an elegant handset, that’s made with the aid of the diamond cutting carving process. Android 5.1 is customized here, with something called the LEAGOO OS v.1.1, that seems to be very colorful and flat.

Leagoo Elite 4 also comes with a LFC flash charge function, that makes the battery charge up to 40% in the time you make a cup of tea. The charge goes up to 60% in the time you take a nap, according to its maker. This handset also brings a special dual microphone setup, with one mic for a clear phone call and the other to eliminate background noise.

I should also mention there’s a microSD card slot in the mix, with support for up to 32 GB of storage. The smartphone measures 8.9 mm in thickness and weighs 150 grams, so it’s pretty slim and compact, even by today’s standards. Its back camera area reminds me of one of the latest Motorola phones. 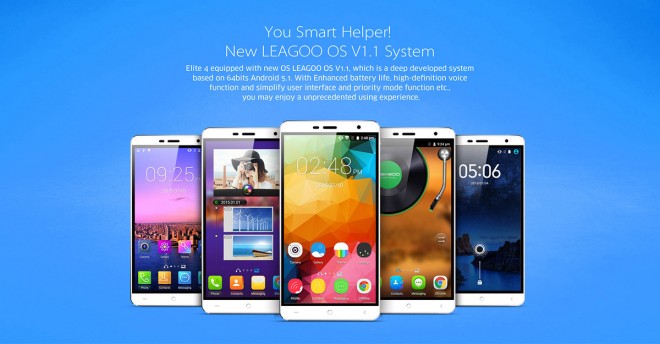 Leagoo Elite 4 brings a 2400 mAh battery, that’s rated at 250 hours of standby time and 16 hours of calling time. The good thing here is that this model can also serve as a power bank for other devices. Coming in black, white, pink and beige, with a soft touch back, this model is usually priced at $99.99. However, there’s a special offer on Everbuying, that has it at $79.99, limited to 100 units in stock, beginning on September 3rd from 9:00 GMT.