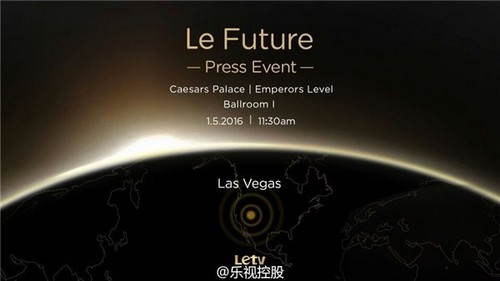 In this Spring, more precisely in April, on the Chinese mobile market showed up another player, one called LeTV that stands behind a video platform with the same name. At the time, LeTV announced three amazing smartphone devices, and later this year, another phone was announced – the LeTV 1S phablet. As the rumors spread fast everywhere in the world, we found out that LeTV is developing another device called LeTV Max Pro.

Today we have some new information about this device. As you can see in the picture above, LeTV plans a press conference at CES 2016 in January, location where the LeTV Max Pro is expected to be officially unveiled. This event will take place on January 5th at 11:30 AM in Las Vegas, Caesars Palace.

As for the phone, we expect to see some great specs like a 5.5-inch Quad HD display, a quad-core Qualcomm Snapdragon 820 processor, 4 GB of RAM memory and 64-GB space of internal storage. A 21-megapixel rear camera and a 4-megapixel front-facing sensor will also be on board. Apparently, LeTV Max Pro will run Android 6.0 Marshmallow out of-the-box.