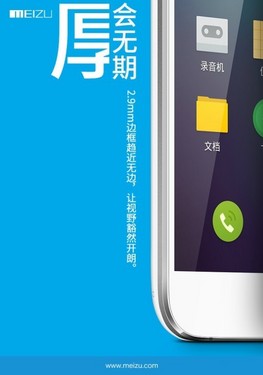 It’s no secret that we’re getting closer to the Meizu MX4 launch and that the phone will be an ultra thin unit launched in September. A new teaser has been posted regarding the waistline of the newcomer, that’s promoted as very skinny, although the poster below doesn’t exactly detail that concept.

In this case, thin means around 1.1 mm narrow border for the screen and probably 6 or 7 mm for the case thickness. The Meizu MX3 was pretty beefy, at 9.1 and its 2.9 mm bezel, that was pretty narrow in its days. Aside from being thin, the newcomer will use a 5.4 inch screen with a very high resolution, according to rumors, 3 GB of RAM and a 16 or 20 megapixel Sony G lens camera.

Rounded edges and an unique capacitive Home button have been confirmed by another leak a few days ago. This model will get 4G LTE, Flyme 4.0 OS based on KitKat and maybe even a fingerprint sensor, although there doesn’t seem to be any room for that at the front.