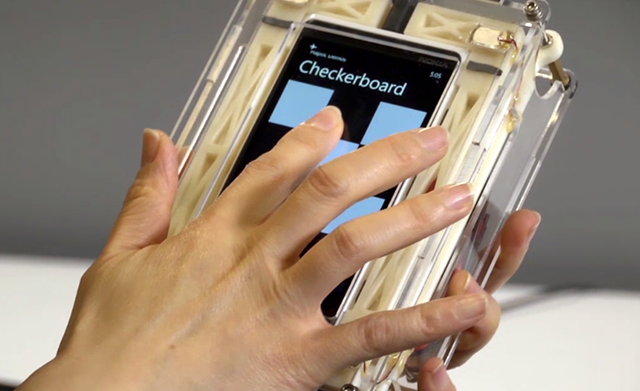 Recently, Microsoft Research Asia unveiled a new feature that will allow users to fell the display of a touchscreen device. This feature is called Tactile Haptic Feedback and its main purpose is to improve speed and accuracy while typing.

It seems that this technology can be implemented in three different ways/techniques. The first one uses piezoelectricity to scroll down the screen when a user clicks on it, simulating the feeling that we’re getting when typing on a hardware keyboard. A technique like this is showed up in the video below using a Lumia 520 and a Surface Touch Cover.

The 2nd method refers to a high-speed vibration and a layer of air that’s changing the feel of the user’s screen surface, a technique demoed on a Lumia 920. As you can see, a piece of glass was put on top on the phone and we can feel when a surface is smooth or sticky.

The last one uses static electricity, more precisely in order to create a tactile feedback, a small amount of electricity between our finger and the screen will be used. Unfortunately, we don’t know when this tactile feedback is going to show up on smartphone devices, but is something that worth the wait.