Microsoft is supposedly working on a very interesting new form factor for a mobile device, that involves a detachable dual display. That’s shown by a recent patent uncovered in documentation published by Microsoft. Patent Bolt is the one reporting on this, having uncovered details about a dual display smartphone that can separate into two functional units. 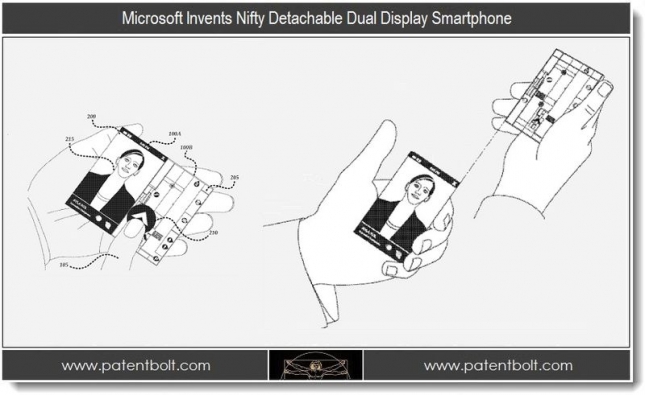 If I’m not mistaking, a couple of years ago during a trade show we saw an Asian company showcasing a phone with dual detachable modules that came together via magnets and Bluetooth. That was a Japanese phone, so it can be done. It was also a pretty thin device with a clamshell form factor. The idea here is to have one screen for browsing on the web and the other to dial a number and actually talk to someone using that part of the phone, while checking your email.

In the case of the Microsoft gizmo, the two sides come together via magnetic strips that are aligned edge to edge to the side of the screen, or at least so says the patent. The documents were filed in February of this year, but MS has been owner of the technology since 2009.