Android and Me have somewhat of a world premiere, since they’ve managed to catch on camera their hands-on experience with Motorola Droid 2. The follow-up to the first and very successful Moto Droid model, this handset is NOT Droid X, no matter what anyone else says. As far as we’ve heard, Verizon will be releasing this phone in the following weeks. 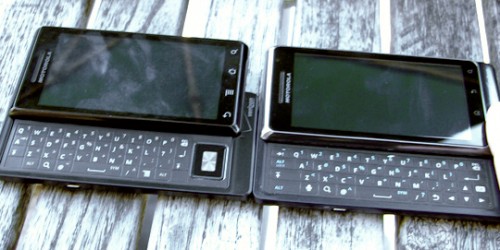 A thing to separate Droid 2 and the X model is the presence of a physical QWERTY keyboard on the first handset. Overall, the new Droid is similar to its predecessor, unless you count the arrow keys, replacing the gold directional pad. The most important change is the one on the inside, as the new phone sports a 1GHz TI OMAP3630 CPU, a great improvement over the original 550 MHz TI OMAP3430.

512MB of RAM are also on board, double when compared to the first Droid, while the new model keeps the PowerVR SGX530 GPU of the first phone. Benchmarks and tests of the device are available in the video below: